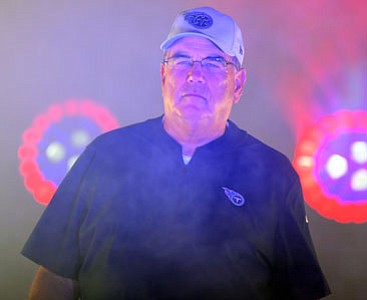 Titans defensive coordinator Dean Pees walks out of the locker room before a game at Nissan Stadium in Nashville, Tennessee in 2018. Courtesy Photo/NFL.com

The game on Sunday, October 14, 2018 against the Tennessee Titans gives the Baltimore Ravens an opportunity to play against some familiar friends. Former Ravens defensive coordinator Dean Pees is now in charge of the Titans' defense. Linebacker Kamalei Correa was acquired by Tennessee in a trade with Baltimore just before the season started.

Then there is Kendrick Lewis, a former starting safety for the Ravens who signed with the Titans before the season started. Lewis wasn't in the NFL last season after the Ravens released him in March. Now he is one of Tennessee's starting safeties due to injuries to Jonathan Cyprien and Kenny Vaccaro.

Special teams ace Brynden Trawick moved on to Tennessee as well. Trawick was with the Ravens from 2013 - 2015 after signing as an undrafted free agent. He signed with the Oakland Raiders in 2016, then spent last year with the Titans and he was selected for the Pro Bowl for the first time as a special teams player.

Pees retired after a crushing 34 - 27 loss to the Cincinnati Bengals knocked the Ravens out of playoff contention last year. Cincinnati scored the game-winning touchdown with under a minute left in the game. Instead of attacking, the Ravens defense sat back in coverage as Bengals receiver Tyler Boyd found a seam in the coverage and hauled in a 49-yard pass from Andy Dalton for the touchdown. The fact that the play came on fourth-and-12 made it all the more frustrating.

Ravens fans were critical of Pees while he was in Baltimore even though the defenses that he oversaw were consistently solid units. Head coach John Harbaugh spoke about Pees on Monday.

"He did a good job here and put a lot of good defenses together here in Baltimore. I hope fans understand and believe that. We have a lot of respect for Dean," Harbaugh said.

The Titans defense is allowing an average of 333.2 yards per game, which ranks seventh in the NFL. Pees, has effectively recreated the success that he found in Baltimore. Now he will get to face his former team on Sunday.

Pees, isn't the only former Raven in Tennessee that was considered a disappointment. Correa was a second-round pick (No. 42 overall) by Baltimore in 2016. Under Pees, Correa was moved from an outside linebacker to an inside linebacker.

Correa played in nine games making four tackles and one pass breakup before he was placed on injured reserve in December 2016. His second NFL season was less than stellar. He started three games and registered 15 tackles for the year.

Having moved on to the Titans, Pees didn't forget about Correa's ability to rush the passer. Deemed expendable by the Ravens, Tennessee capitalized by sending a sixth-round pick in 2019 to Baltimore in exchange for Correa, the 24-year-old linebacker.

After sitting out the final preseason game, Correa was inserted into a rotation at outside linebacker and posted his first sack in the season opener. Correa has two sacks so far in 2018. It will be a reunion in many ways when the Titans and Ravens square off in week 6.