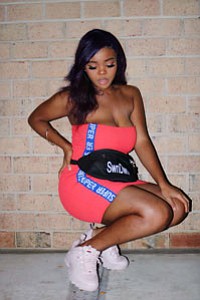 When it comes to rating musical projects, one of the most important points that I hone in on, is the project’s fluidity. Yes, a few good songs here and there can be nice by themselves, but do they really fit the vibe and/or message that the artist is attempting to communicate? We may all have heard of the cliche, “a first impression is a lasting impression,” and for 21 year-old Baltimore native, Kay L.A., her opening track “Wave” speaks volumes about her debut project titled: Summer in LA.

Wave was my first encounter with Kay L.A. as an artist, just as it was for many others who gave this five-song project a listen. I was anxious to hit the play button, as I wondered what I would be getting myself into for the next three minutes and 20 seconds of my life.

When the piece began, I was instantly drawn in by a suspenseful aura being built through the instrumentation. As I expected, the aura quickly took a turn, and yes, it was a turn for the better. A female vocal sample is looped very cleanly over the equally smooth percussion/bass. Kay begins to adlib a bit, giving the listener a glimpse of how real this is becoming, No longer do we wait and wonder what is the sound of Kay L.A.— here it is.

Before I could dissect the musicality of Kay’s voice, what truly stood out to me was her sheer confidence. She was never rushed, never hesitant, never unsure. Kay truly owned the moment.

I’ve listened to songs from new artists, and sometimes their voice is great, and the track is nice as well, but they’ll be missing that command over the song, which makes every bit of a difference in the listening experience.

Kay’s voice slides in quite provocatively and enticing to say the least. There is an underlining tranquility and “matter of factness” to what she is telling to her lover throughout the piece. Kay expresses that she has been the best relationship partner that he has ever had, and along with that, she would do just about anything for him, even if it wasn’t in her best interest. Her partner on the song, Andre Flores compliments Kay’s style very nicely. His aggressive and straightforward approach smoothly juxtaposes Kay’s laid back feel. I thought it was an interesting decision to have a feature on her opening track, but it worked in her favor.

Among all of the creativity going on, from a technical standpoint, the engineering of the piece was superbly done. At times with new artists, one of the roadblocks that seems pop up on the road to a good sound, is the actual quality of the sound itself. Everything from the volume to the reverb to the equalization was superb. The engineering gives this song an extra boost and takes it from just a good song, to a professional sounding song.

I'm looking forward to Kay’s progression and growth as an artist. Keep on surfing!