Organization Showcases Merchandise ‘Made in Baltimore’ 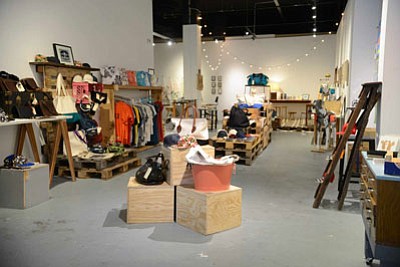 Made in Baltimore pop-up. Kyle Pompey

When the “Made in Baltimore” sign was unveiled earlier this month at a pop-up shop on North Avenue, it marked the sixth time that the city-backed operators showed off goods made by local artisans and entrepreneurs.

The storefront promises to remain open for at least six months or even permanently, which some said is a commitment that represents recent progress in luring tenants to spots along a once-neglected commercial corridor.

“No question the arts community is powering this,” Ellen Janes, executive director of the Central Baltimore Partnership, told reporters at the event.

The Central Baltimore Partnership has reportedly led efforts by a host of arts groups, as well as other academic, neighborhood, business, government and nonprofit organizations that have invested more than $133 million in the past five years in revitalization projects around a stretch of North Avenue.

“Made in Baltimore” is a local branding campaign aimed at increasing jobs and entrepreneurship in Baltimore’s light-manufacturing sector.

“We do this primarily by supporting and promoting small ‘maker’ companies, and by encouraging Baltimoreans to buy local,” said Andrew Cook, who heads “Made in Baltimore.”

The project began in Summer 2015 with the first pop-up shop featuring all locally made goods. The shop featured products by 80 companies.

“When it was over, we surveyed those companies to see if they felt a local brand they could put on their packaging or marketing materials would be useful,” Cook said. “The overwhelming majority said ‘yes’, and so we began raising funds for the program. In 2016, we received a grant from the US Economic Development Administration to launch ‘Made in Baltimore’ as a program of the Baltimore Office of Sustainability.

“We’ve since expanded to run a business certification program, a pilot workforce development program for the sewn trades, a business development workshop series, a suite of marketing efforts for the companies in the network, and six more pop-up stores for locally made goods.”

Cook says he sees the project primarily through the lens of building community wealth.

It’s also a pride thing, Cook added. With its share of negative narratives, the city also has much good work that’s been done by self-made, creative entrepreneurs whose stories are rarely told.

“We believe that by elevating those stories, and gathering them under an emblem like MIB, we provide a counter-narrative for Baltimore that makes people proud to be living here and working here,” Cook said. “Sports teams have good seasons and bad seasons, but our local businesses are always inventing, hustling, and delighting us with what they do. I’d like to see Baltimoreans demonstrate the same passion for local businesses as they do for our local sports teams.”

The immediate goals, Cook said, include getting people to come and shop at the Made in Baltimore store because the sales go right back into their programming, which includes video and ad campaigns, free business development training, and public events to help introduce local residents to the companies in the organization’s network.

“Long term, we want to see light-manufacturers hiring more people from our communities. Jobs in light-manufacturing tend to be full-time, pay a living wage, and rarely require a college degree,” he said. “We need more of these jobs in our neighborhoods, and our goal is to help the businesses we work with create those jobs.”