Pythias A. And Virginia I. Jones African American Community Forum On Memory Loss

Annual Event to be held at New Psalmist Baptist Church 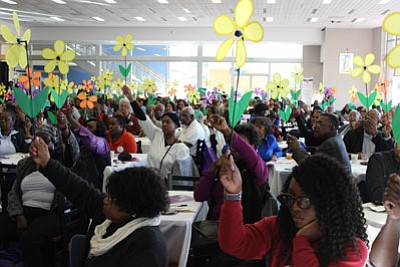 Attendees raise their flowers during the “Promise Garden” ceremony. Each colored flower distinguishes how the disease has affected the person's life. People holding yellow flowers are currently caregivers of someone with the disease; people holding blue flowers have the disease; orange represents supporters; and purple represents people who have lost a loved one to the disease. Courtesy Photo

According to the Alzheimer’s Association, over 5 million Americans are living with Alzheimer’s disease, and as many as 16 million will have the disease in 2050. The organization also points out that Alzheimer’s is the sixth leading cause of death in the United States and the fifth leading cause of death for those aged 65 and older. The statistics further note that the cost of caring for those with Alzheimer’s and other dementias is estimated to total $259 billion in 2017, increasing to $1.1 trillion by mid-century.

Despite these staggering statistics and the impact that the disease has on millions of lives, many people find themselves looking for answers and support when it comes to Alzheimer’s disease. One local organization is looking to change that through its continued efforts and the presentation of an annual event. The Greater Maryland Chapter Alzheimer's Association will present the Pythias A. and Virginia I. Jones African American Community Forum on Memory Loss.

The event will be held on Saturday, November 3, 2018 at New Psalmist Baptist Church, 6020 Marian Drive in Baltimore. The forum, which is in its 14th year, started as a community outreach by sisters, Ernestine Jones Jolivet and Verna Jones-Rodwell.

According to event organizers, the two wanted to provide resources on dementia to the African American community after finding it was hard to find resources and information when their parents were diagnosed with dementia. The forum is named in the parents’ memory.

“For 13 years, we had this event at Coppin State University, but we have outgrown it,” said Junnell Daniels, education coordinator for the Greater Maryland Chapter Alzheimer's Association. “We are excited to move to New Psalmist, which allows us to not have a waiting list or have to turn people away. Coppin State University will be there to offer free health screenings, and we are very excited to continue that with them. The goal of this event is to let people know that education and resources are available, and that they are not alone on this journey.”

According to the Alzheimer’s Association, Alzheimer’s disease is a type of dementia that causes problems with memory, thinking and behavior. Symptoms usually develop slowly and get worse over time, becoming severe enough to interfere with daily tasks. Alzheimer’s is the most common form of dementia, a general term for memory loss and other cognitive abilities.

The organization also highlighted that nearly one in every three seniors who dies each year has Alzheimer’s or another dementia. African Americans are twice as likely to develop Alzheimer’s disease than whites. This is attributed to African Americans having higher rates of vascular disease such as hypertension and diabetes.

The Alzheimer's Association is the leading voluntary health organization in Alzheimer's care, support and research.

According to Daniels, the forum will offer a plethora of information, which will include financial planning, nutrition and brain health, ways to recharge as a caregiver, and how spirituality can play an important role in the life of the person with the disease and the caregiver.

“Alzheimer’s Disease is not a normal part of aging,” said Daniels. “That is a common misconception. Right now, there are 110,000 people in Maryland living with Alzheimer’s. From a caregiver’s point of view, there are 16.1 million people performing unpaid care. If they attend this forum, they will learn about the many resources that are available to them.”

She added, “This is a free community event that is open to the public. We are anticipating 400 or more people will attend.”

“There is hope with research and clinical studies,” said Daniels. “We provide education classes, webinars, and many other services. There is no reason not to call us. We always answer the phone with a live human-being. People can vent, find a support group, or register for an event or class. It does not matter. We are there to support them.”

The Pythias A. and Virginia I. Jones African American Community Forum on Memory Loss is free, but registration is required. To register, or for more information call (800) 272-3900 or visit www.alz.org/maryland.