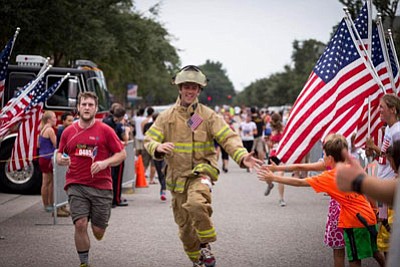 The Travis Manion Foundation 9/11 Heroes Run 5K race and 1 mile Fun Run unites the community to remember the nearly 3,000 lives lost on 9/11, as well as to honor our veterans, military, and first responders who serve our country and our communities. (Above) A firefighter high-fives children in the crowd cheering on the runners in a previous race. For more information about the 9/11 Heroes Run in Annapolis or to register, visit: www.911heroesrun.org/annapolis. Courtesy Photo/Travis Manion Foundation

ANNAPOLIS — The 2018 Travis Manion Foundation 9/11 Heroes Run in Annapolis has will be held on Sunday, October 28, 2018 at the Navy-Marine Corps Memorial Stadium at 2 p.m. The annual 5K race and 1 mile Fun Run will unite the community to remember the nearly 3,000 lives lost on 9/11, as well as to honor our veterans, military, and first responders who serve our country and our communities.

The 9/11 Heroes Run 5K series was inspired by Marine 1st Lt. Travis Manion, who was killed by a sniper in Iraq in April 2007, as he selflessly protected his battalion.

Before his final deployment, Travis visited Rescue One in NYC— famous for losing almost all of their men on 9/11— and returned home with deeper passion about why he was fighting in Iraq. At its heart, the 9/11 Heroes Run is a tribute to a personal commitment to never forget the heroes of that day. Now in its 11th year, the 9/11 Heroes Run national race series will be held in more than 50 locations across the country and around the world, and is expected to draw over 60,000 participants.

For the 2018 race series, Travis Manion Foundation has partnered with GORUCK to launch a new division where participants can ruck the 9/11 Heroes Run. Rucking is simply moving with weight on your back and is the foundation of Special Forces training. It combines strength and cardio, is adaptable to anyone’s goals based on the amount of weight carried, and is a popular, empowering activity for those who hate to run or find it boring. As part of the marketing campaign for 9/11 Heroes Run series, TMF has released a video to inspire runners and walkers of all ages to participate.

During this divisive time in our country, I’m in awe at how so many communities across the country and around the world will put differences aside and coming together to honor all those touched by the events of September 11, 2001,” said Ryan Manion, President of Travis Manion Foundation. “We challenge all Americans to join us this September, to ensure our future generations never forget the sacrifices of our veterans, active duty military, first responders, and civilians who were affected by the attacks on 9/11 and in the wars since.”

For more information about the 9/11 Heroes Run or to register, visit: www.911heroesrun.org/annapolis.