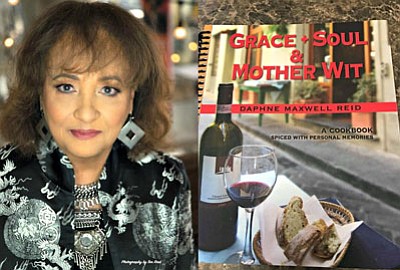 For those who only know Daphne Maxwell-Reid as “Aunt Viv” from the smash 1990s hit comedy, “The Fresh Prince of Bel Air,” there is so much more to behold.

Maxwell-Reid, the wife of acting icon Tim Reid, started her career as a model and became the first African American to appear on the cover of Vogue magazine in 1969.

In addition to the “Fresh Prince,” which starred superstar Will Smith and the late James Avery, Maxwell-Reid appeared in the police drama “Hill Street Blues,” and the comedy hit, “WKRP in Cincinnati.”

She has also published several books on photography and now, her latest is a cookbook titled, “Grace, Soul and Mother Wit: A Cookbook Spiced with Personal Memories.”

“It’s about serving love through food,” Maxwell-Reid told the Baltimore Times. “Some of my favorite recipes are the ones my mother cooked when we were growing up and then when we came to visit. Each of them has a story, and what it means to me.”

The book contains original recipes that Maxwell-Reid previously wrote on her computer, which she says she gathered from loved. Her book also features numerous anecdotes and photos of her life when she was growing up, the majority of which were taken in the kitchen.

She attended Chicago’s Northwestern University where she was named the school’s first African American homecoming queen.

A former model with the elite Eileen Ford Modeling Agency, Maxwell-Reid landed the cover of Vogue Magazine while attending college.

“It was to me just another day of modeling when I was at school and I had kind of a mentor named Amy Green who’d call me and say come to New York and I’d fly to New York,” Maxwell-Reid said. “She said to wear a red turtle neck and some mascara and lip gloss and sit near the window and that’s what I did, and I don’t think the photographer even used his full roll of film. I did the shoot, flew back to Chicago and later, I’m walking by the newsstand and saw my picture. They didn’t tell me. They didn’t say anything.”

Maxwell-Reid has remained busy since the “Fresh Prince” series ended in 1996. She was also busy before landing a role on that show, appearing in movies and television shows like “Coach of the Year,”

“Protocol,” and “Murder She Wrote.”

Most recently, she has appeared on UPN’s “Eve,” and BET’s “Let’s Stay Together.”

Along with several other projects and commitments that have kept her busy, Maxwell-Reid is busy with her cookbook.

“After publishing four books on photography and with people asking me when I would write my memoirs, I decided to get this off of my computer and to combine my memoirs with recipes,” Maxwell-Reid said.

She explains the three key words in the title of her new book, Grace, Soul and Mother Wit.

“Grace is hopefully the way I’ve lived my life. With grace and integrity and it’s what you say before a meal,” Maxwell-Reid said. “Soul is the community from which I sprung, and it’s the depth of love and culture that I carry from my ancestors. Mother Wit is something you’re either born with or get to learn. It’s innate intelligence that can be couched as common sense so [in the cookbook] I give you tools to have a little mother wit in the kitchen like how to set the table, what to have in your pantry at all times. as well as give you the richness of my culture and family.”

To purchase a copy of Maxwell-Reid’s new book, “Grace, Soul and Mother Wit: A Cookbook Spiced with Personal Memories,” go to http://www.daphnemaxwellreid.com/.