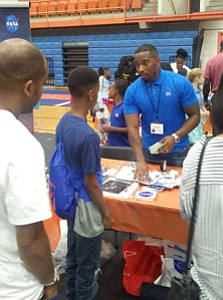 Miquel Moe, an electrical engineer from the NASA Goddard Space Flight Center in Greenbelt, Maryland, an exhibitor at the STEM Extravaganza presented the hands-on exhibit, “Ready, Set. Go to Space.” Scores of interested children came to the NASA table to make satellites with wooden sticks, styrofoam and aluminum foil as they learned of the importance of their involvement in science and engineering. Demetrius Dillard

The seventh annual Baltimore STEM Day Extravaganza at Morgan State University (MSU) on Saturday, September 8, 2018, turned out favorably— attracting hundreds from Baltimore City and the surrounding areas to participate in a fun-filled day of interactive and educational STEM-related activities.

The event, started to encourage school-aged children— particularly black inner-city youth— to pursue careers in STEM (science, technology, engineering and math) related fields has emerged as one of the most anticipated educational gatherings in Baltimore City.

Jonathan Wilson, an associate professor of biology at Morgan State, one of main originators is the coordinator of the STEM event, which has been held on the campus of Morgan State since 2012.

“We started it because we wanted to open the experience up to more people who were not available or privileged to come to the Saturday Academy,” said Wilson, also the director of the Baltimore MUREP (Minority University Research Education Program) Aerospace Academy. “We were asked to do more for the community people, other than those who come to the Saturday Academy or the summer program. So we decided to do what is called a STEM Day.”

The parents, students and other attendees got a taste for an activity-filled day of hands-on sessions while learning the quality and essence of STEM.

There is an apparent shortage of black professionals in STEM-related careers, and one of the primary objectives of the extravaganza is to encourage black students to think bigger of themselves than what they perhaps might have in the past.

The yearly extravaganzas, according to Wilson, also aims to enable black students and other minorities to aspire to become scientists, engineers and mathematicians, and to leverage their knowledge to empower and impact their communities. He added that the STEM extravaganza has made substantial progress over the years and has yielded a great deal of positive feedback from the community.

The aforementioned exhibitors had representatives that provided hands-on interactive activities and various mind-intriguing science experiments, all with the common goal of providing parents and families with educational materials and techniques to keep their children interested in academics— specifically in the STEM field.

Miquel Moe, an electrical engineer from the NASA Goddard Space Flight Center in Greenbelt, Maryland, an exhibitor at the STEM event presented the hands-on exhibit “Ready, Set, Go to Space.”

Scores of interested children came to the NASA table to make satellites with wooden sticks, styrofoam and aluminum foil as they learned the importance of their involvement in science and engineering.

“It’s wonderful,” said Moe, a Baltimore native and Morgan State alum in characterizing the STEM extravaganza. “To see all of these different organizations out here doing hands-on activities with the kids, inspiring kids to do STEM, it’s like invaluable. It’s just so important, especially for this community, to do things like this.”