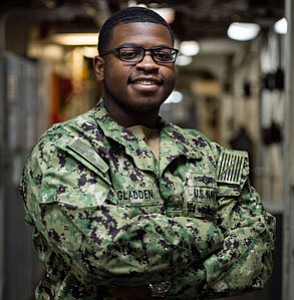 Mayport, Fla. — A 2014 Mergenthalar Vocational Technical High School graduate and Baltimore native, is one of 1,200 sailors who recently returned to Naval Station Mayport after a six-month deployment aboard USS Iwo Jima.

Petty Officer 3rd Class Jarrell Gladden is a Navy cryptologic technician (technical) class aboard the Iwo Jima, an amphibious assault ship, who recently deployed to the Middle East and Mediterranean areas of operation. For more than half of the sailors aboard Iwo Jima, the six-month journey served as their first deployment, according to Navy officials.

“The best part about my job and being on deployment is the trust and responsibility factor on the ship so all are safe," said Gladden, who credits his success in the Navy to many of the lessons learned in Baltimore. “The one thing I learned, is to let nothing hold you back from your goals.”

Iwo Jima made port calls in Haifa, Israel; Limassol, Cyprus; Aqaba, Jordan; and Malaga, Spain. The visits helped grow the strong alliance between the U.S. and its partner nations as well as providing an opportunity for the crew to experience cultures from around the world, according to Navy officials.

Deployed since February 7 as part of an Amphibious Ready Group (ARG), the ship participated in exercises Juniper Cobra and Eager Lion. It also hosted a 10-day embarkation of Egyptian naval officers to discuss concepts of amphibious naval operations and strengthen partner nation capabilities.

"This deployment was the most high-tempo one I’ve experienced in my 25-year naval career,” said Capt. Joseph O’Brien, Iwo Jima’s commanding officer. “The entire Navy and Marine Corps team performed extraordinarily well in an incredibly dynamic environment throughout deployment. The sailors and Marines working on equipment, launching aircraft on the flight deck, conducting amphibious operations, navigating the ship and standing watch down in the plant were all at the absolute top of their game. This is an amazing group of sailors and Marines, and I am honored to serve with them.”

Though there are many ways for a sailor to earn distinction in their command, community, and career, Gladden is most proud of completing the deployment without any mishaps.

As a member of one of the U.S. Navy’s most relied upon assets, Gladden and other sailors know they are part of a legacy that will last beyond their lifetimes, one that will provide a critical component of the Navy the nation needs.

“Serving in the Navy means being that one percent in the nation that are in the military, and in a moment's notice being called to defend our country,” Gladden said.