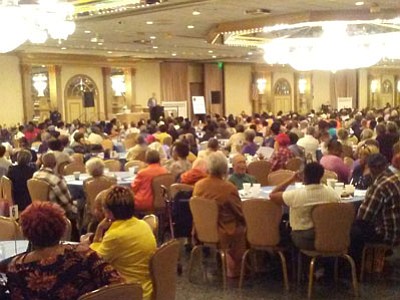 Over 800 seniors from the Baltimore area attended the 12th Council President's Senior Symposium designed to provide seniors with important information regarding health, wellness, finance, housing and other services that aid aging adults in Baltimore and the surrounding communities. Demetrius Dillard

The symposium was comprised of about 800 seniors from throughout the community and representatives from businesses, government agencies and nonprofits focusing on the needs of the aging.

The symposium dates back to 2012 and has grown exponentially over the past six years.

“We thought that our seniors needed to have other avenues where they can get information that’s really helpful,” said Young of why he started the symposium.

“Seniors are vulnerable. They’ve got to decide whether they want to pay their rent or whether they’re going to buy medicine, or if they’re going to pay for food. And so we thought this would be a great idea and opportunity to bring them in so they can get information they otherwise wouldn’t get. Plus they can mingle with each other and get to bond and make new friends— that’s what this is all about.”

More than 80 vendors participated in the senior expo designed to provide seniors with important information regarding health, finance and other services that aid aging adults in Baltimore and the surrounding communities.

The event was about four hours long and highlighted local doctors, public figures and community-based representatives who spoke on various topics pertinent to health and wellness of elders.

A native of East Baltimore, Young has been a part of the city’s political scene for more than 20 years, during which he has established himself as a prominent figure in the community. He is approaching his 12th year as city council president.

Young has played a crucial role in passing legislation increasing funding for education and crime prevention. He has also worked diligently with other governmental agencies to create employment opportunities for Baltimore youth, as well as helping to spur economic development.

“It’s important that our seniors know that we care about them. They’re the ones who paved the way for people like me to do what I do. This is my way of giving back,” he said.

Vendors at the expo offered seniors’ access to health screenings, such as Hepatitis C testing and access to free immunizations, preventive medical screenings, and an abundance of information about federal, state and local programs benefiting the elderly.

Comprehensive Housing Assistance, Inc. (CHAI), an organization with a mission of helping older residents remain safe, well and independent in their homes was a participant at this year’s symposium.

“It’s been amazing,” said Jessica Price, CHAI’s outreach and operations manager, and representative at the symposium. “We’ve been able to meet a lot of great community members. We have the opportunity to share about all of our different programs and be able to help our members connect to some of our resources.”

Mary Burnett who was attending the symposium for the first time said she thought the event was insightful and purposeful for older adults.

“Wonderful! I can’t believe it. [I was impressed by] all of the vendors,” said Burnett said.

Burnett spent her career as a social services worker in Brooklyn, N.Y., and moved to Baltimore after she retired. She says she took advantage of the health screenings and was intrigued by some of the informative presentations and speeches.