Ravens And Steelers Add Another Chapter To The NFL's Best Rivalry 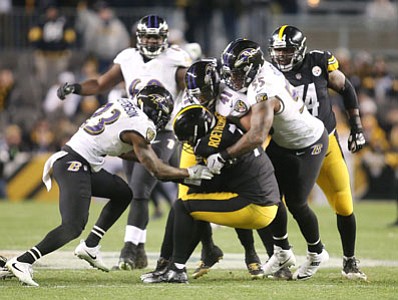 There are few rivalries better than the one between the Baltimore Ravens and Pittsburgh Steelers. The two teams genuinely dislike each other, which leads to some intense matchups regardless of their records.

Dating back to 1996, the Steelers hold the advantage with a 27 - 21 lead in 48 games. The two teams faced off three times in 2008 when they added an AFC Championship game clash to their two regularly scheduled games every season.

The Steelers pulled off the rare trifecta by beating the Ravens all three times and Pittsburgh went on to win Super Bowl XLIII against the Arizona Cardinals.

An example of how intense the rivalry can be was clearly seen when back in 2016, Ravens All-Pro pass rusher Terrell Suggs told Sports Illustrated how much he hates the Steelers.

The game on Sunday, September 30, 2018, will be the 49th time the Ravens and Steelers meet. Pittsburgh is coming off a close win over the Tampa Bay Buccaneers where quarterback Ryan Fitzpatrick passed for over 400 yards and three touchdowns. The Steelers were able to get three interceptions against Fitzpatrick including an interception return for a touchdown by Bud Dupree.

While Flacco isn't likely to pass for 400 yards this week, he is equally unlikely to throw three interceptions. He'll get plenty of opportunities to make plays against a Steelers defense that is allowing 288.8 passing yards per game— number 28 in the NFL.

Michael Crabtree is one of Flacco's favorite targets in the passing game. Crabtree and Flacco are poised for a big game against the Steelers. The addition of the veteran free agent is the latest wideout that Raven’s general manager Ozzie Newsome added to boost the passing game.

Newsome established a trend of signing veteran receivers in 2005 when he added former Tennessee Titans wideout, Derrick Mason followed by Anquan Boldin and Steve Smith Sr. Each were already part of rivalries in the past but none as intense as the one between the AFC North rivals.

Smith described the rivalry as a "professional hatred" between the franchises.

"Our fans hate them. Their fans hate us," Smith said. "It's a great divorce."

While with the San Francisco 49ers, Crabtree experienced the 49ers and the Seattle Seahawks rivalry, which was always full of fireworks. He will undoubtedly be ready for his first Ravens vs. Steelers clash.

Baltimore travels to Pittsburgh on Sunday after a 27 - 14 win over the Denver Broncos at M&T Bank Stadium. The game will be televised on NBC's Sunday Night Football.

"It's another prime time game in Pittsburgh. We are excited about that," Head Coach Jim Harbaugh said.

The AFC North is up for grabs this season. With do-it-all running back LeVeon Bell still holding out, the Steelers are no longer the clear-cut most talented team in the division. Both teams have 2 - 1 records and a win on the road at Heinz Field would help the Ravens set the tone early in the season.