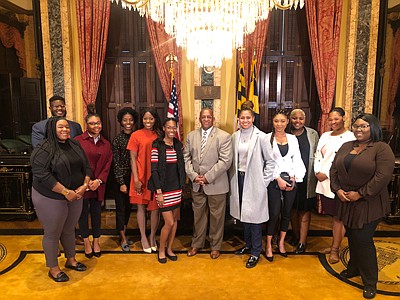 For a group of Morgan State University students, their class took them straight to the top.

Straight to the city’s top elected official that is. The young men and women are students in Morgan’s SCOM 220 (Strategic Communication Writing) class, and were given an opportunity to discuss their Fall 2019 class projects with Baltimore Mayor Bernard C. “Jack” Young.

Their class projects are called “Branding Baltimore”, and are multimedia narratives of everyday people living in Baltimore. The narratives are slated to begin airing on CharmTV Spring 2020. Launched in 2014 by the City of Baltimore, CharmTV’s mission is to creatively deliver content that spotlights the essence of Baltimore.

Morgan senior Blanca Assie, 26,was among the students to participate in the Meet & Greet with Mayor Young. The session, which included a tour of City Hall, and even cookies baked by the Mayor, took place Tues. Nov. 26, 2019.

“It was really exciting,” said Assie who wants to work in Public Relations and Advertising. “We were rewarded for the work we have been doing. I am really grateful for that.”

She added, “Meeting Mayor Young face to face, I learned that he is for Baltimore, and is working for the people. He means what he says, and really wants to turn the violence around.”

The students also participated in a Q&A session with the mayor.

“I think the students are leaving City Hall with a greater sense of understanding the challenges facing leaders in urban communities,” said Dr. Marshall. “For most of these students, it’s the first time they have been in a room with the mayor. The question and answer session also gave an opportunity to follow-up instead of relying on a soundbite. This makes for a better-informed student, which leads to a better democracy.”

According to Dr. Marshall, the SCOM Capstone class has been doing a content analysis research project this semester examining more than 6,000 social media and digital postings about the hashtag #baltimore. The students are using the theory of framing to explain exactly what people are saying about Baltimore in the social and digital world--and making communication recommendations to the city based on the data about strategies to better tell Baltimore's stories.

“The role of the university is not to produce just practitioners,” said Dr. Marshall. “The role of education is to get students to think about their role in the world, and do something on their own personal convictions. It empowers them to move democracy forward.”

He added, “The tools are cell phones, cameras and press releases. That’s the big value of an event like this. How many young people in the city can say they got involved in a ceremonial room at City Hall? It’s a big deal and the type of positive things we need in light of the political landscape. More positive experiences to keep young people engaged in politics and in their communities, so that they are not turned off by what they see. This is a powerful way of making that happen.”

Tonya Miller Hall is Senior Director of Public Affairs for the Mayor’s Office and Executive Director of Charm TV.

“My goal at Charm TV is to bring forward content that spotlights Baltimore in a new and interesting way,” she said. “I partnered with the students at Morgan State University under Dr. Marshall’s leadership to create content specially for CharmTV. The stories the students share through their programming are the small gems. These are the local heroes of Baltimore that the students showcase in short form content.”

Hall said events like the Meet & Greet “shows” young adults what they can become.

“We often forget that many of our young people of color don’t have the same access to people as others do,” she said. “The fact that they were in the room with the mayor allows them to see what’s possible. Mayor Young is a local Baltimorean. He was born and bred in this city. Although it may be aspirational, it shows the students that becoming mayor is attainable.”