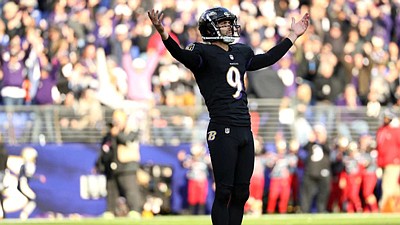 Baltimore Ravens Justin Tucker, an eight-year veteran is the most accurate kicker in NFL history and the fastest kicker to 1,000 points. Courtesy Photo/NFL.com

With seconds left on the clock, Baltimore Ravens head coach John Harbaugh confidently sent kicker Justin Tucker onto the field to attempt a 50-yard field goal to win the game. Given the current uncertainty surrounding kicking accuracy across the league, a player like Tucker is a luxury.

“You wouldn’t rather have anybody else in that situation. That field, that wind, that rain, all of that stuff that was going on there. That’s the guy you want in that situation. I’m very grateful that we have him on Thanksgiving weekend," Harbaugh said after the game.

Tucker, an eight-year veteran is the most accurate kicker in NFL history and the fastest kicker to 1,000 points. His tremendous leg gives the Ravens an opportunity to put at least three points on the board every time they get to the opponent's 40-yard line.

The Ravens are now sitting on top of the AFC after beating the 49ers and seeing the New England Patriots lose to the Houston Texans on Sunday night. The path to the Super Bowl will likely go through a cold-weather destination.

It should be noted that Tucker's pinpoint accuracy as a kicker has come with him playing his entire career in Baltimore. The weather conditions aren't always ideal at M&T Bank Stadium or any other stadium in the AFC North for that matter. However, that hasn't been a factor for Tucker and he is glad he was able to put the cherry on top of an outstanding performance by the rest of the team last week.

“Yes, the weather conditions were not ideal throughout the game. This is already a tough place to make kicks. I’ve said that before. But to be able to take out or eliminate any question marks— whether the snap is going to be there, whether the hold’s going to be there, whether the timing is going to be right, [it] makes my job so much easier," Tucker explained." So, I can really just focus on getting my studs in the ground with my plant, getting out, up and through with the ball and putting the ball through the uprights. Yeah, the conditions were not great, but being able to come through for this team in that moment is really special.”

The special teams unit has always been a focal point for Harbaugh, a former special teams coordinator with the Philadelphia Eagles. The organization understands the importance of being strong in all three phases of the game. It is reflected in the record-setting four-year, $23 million contract extension they agreed to with Tucker last April. He'll be a player they'll rely on for years to come.