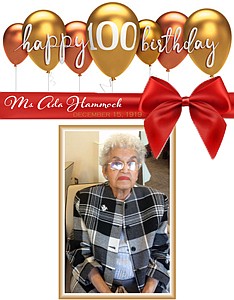 Ada Haddock can tell about 100 stories, including the secret to longevity. Haddock is preparing to celebrate her 100th birthday on Sunday, December 15, 2019 and she says there isn’t much of a secret to living long. "Hard work, which is what I've done all of my life, and prayer," Haddock said.

Her friends at the Westminster House Senior Apartments along N. Charles Street in Baltimore plan to help Haddock celebrate.

"She has really made a great impression on the whole community here," said Cindy Cummings, Haddock's Bible study teacher. "She's a woman of great class. Everybody loves her."

Haddock was born in New York in 1919, but for the past 21 years, she has lived at Westminster Senior House Apartments.

A lover of crossword puzzles which she does every day, Hammock once worked at a library, hospital and eventually, she retired as an Internal Revenue Service employee.

She says her favorite president was Barack Obama— "who else would it be?" Haddock said. "Obama and [John F.] Kennedy."

Longevity appears to run in the family. Hammock's mother lived to age 108.

As the decades' pass, Hammock says she realizes that technology has made life easier in many different ways. Still, she said she refuses to purchase a cell phone. "My [house] phone is enough for me because I'm not a phone person," Haddock said.

"I'm not a person to sit down on the telephone all day long. And, these iPads and things like that are too distracting, the kids always have their heads in them."

When asked if there is one thing she would like to see that hasn't happened in her lifetime, Hammock said she would like all residents to have decent health insurance coverage.

"I don't think we get very good health care as it is, and you pay for everything," Haddock said. "You go to the doctor's office, and all you do is cough, and you're out of there in five minutes. They call that an examination, and then they give you a prescription. They don't bother to really check you out, so with all of the new technology, the discoveries, none of that is helping us."

Haddock added that even with Medicare, there is still too much she and others have to pay for out-of-pocket.

Still, she enjoys life today as she did when she and her friends would do the "Fox Trot," and other dances at the old Savoy Ballroom in New York.

"I love jazz, but I'm not up with the new music because I don't know what they're talking about with the rap music and other stuff," Hammock said. "Now, they just shake. It's not dancing, just shaking."

Hammock says she is proud of young women today who continue to fight for equal rights. She said she'd noticed the struggle for equal pay, and she endorses it.

"We didn't have equal rights when I was growing up, but the women today want equal respect, and there's nothing wrong with that," Hammock said. "I tell [young women] today to respect themselves or other people won't respect them. My motto is, 'Do unto others, as you'd have others do unto you.' These young women are fighting for equal rights, and I hope they get it."