Many Reunited With African Culture At ‘More Than A Fraction: Black Culture Traveling Exhibit’ 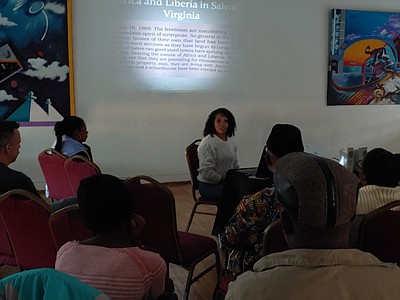 Dr. Kerri Moseley-Hobbs had many reuniting with their African heritage and culture at the Eubie Blake National Jazz Institution & Cultural Center during her presentation of the “More Than a Fraction: African American Heritage & Culture/Traveling African Artifact Exhibit,” recently. Courtesy Photo

The “More Than a Fraction: African American Heritage & Culture/Traveling African Artifact Exhibit” presentation hosted by Dr. Kerri Moseley-Hobbs had many reuniting with their African heritage and culture at the Eubie Blake National Jazz Institution & Cultural Center. This is the second time this year the he Eubie Blake Cultural Center hosted the popular presentation and exhibit - to an even larger crowd.

During research into her ancestry Dr. Moseley-Hobbs discovered the Fractions who were enslaved and freed at the Smithfield and Solitude plantations in Blacksburg, Virginia. By the third generation of Fractions, the Civil War began giving two Fraction brothers, Thomas and Othello, the opportunity to gain their freedom.

The amount of inquiries into such a rich history on an African-American family was over-whelming and led to Dr. Moseley-Hobbs publishing a creative non-fiction account based on the documentation about the Fractions family titled, "More Than a Fraction."

After the book was published, she was asked to present her book and research findings as a lecture for the Civil War Studies Department at Virginia Tech University, which is on the grounds of what was once the Smithfield and Solitude plantations. The lecture had standing room only.

Dr. Moseley-Hobbs has since hosted the presentation/exhibit at several Public Libraries in Maryland and the African American Civil War Museum in Washington, D.C.

Today, Dr. Moseley-Hobbs is a member of the Smithfield-Preston Foundation’s Board of Trustees, which oversees the historic estate where the Smithfield plantation was located, and serves on a few planning committees for the Virginia Tech University Board of Trustees, which oversees the Solitude plantation and the overall majority of land of the Preston family plantations. Both the Smithfield and Solitude plantations are now museums. The Preston family, former owners, were considered the wealthiest family in Virginia at the time. The last heir to the Smithfield estate was William Ballard Preston, a former Virginia State Senator and U.S. Secretary of the Navy, and the last heir to the Solitude estate was Williams’ brother Robert Preston.

Dr. Moseley-Hobbs is a direct descendant of Thomas Fraction, the oldest brother of Othello, on her mothers’ side. Thomas and Othello served in the Civil War and their names appear on the War Memorial Plaza Wall as heroes. Thomas was noted by a local newspaper as being a "well known colored man" when he passed away.

“More Than a Fraction: African American Heritage & Culture” presentation included a very powerful Power-Point section where Dr. Moseley-Hobbs connects the African cultures of her ancestors' to the cultural norms of African-Americans in the U.S. today. The exhibit includes original African artifacts from the region where her ancestors once lived