5 Titleholders Of Major Pageants Are All Women Of Color 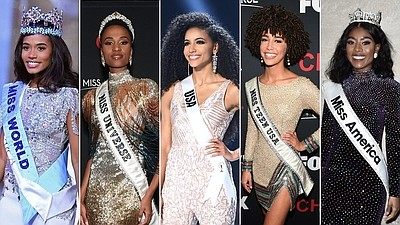 5 Titleholders of Major Pageants Are All Women Of Color

5 Titleholders Of Major Pageants Are All Women Of Color. And That's A Bigger Deal Than You Might Think

(CNN) -- Several decades ago, this wasn't even possible.

Black women weren't allowed to compete in the Miss America pageant until the 1940s, and the first black contestant didn't take that stage until 30 years later. The first black Miss USA wasn't crowned until 1990.

And it wasn't until this month that Miss Universe, Miss World, Miss America, Miss USA and Miss Teen USA were all women of color.

"It's a symbol, and it shows that no matter where you're from, what country you're from ... you can be successful."

She was joined by the newly crowned Miss Universe, Zozibini Tunzi, who said during the pageant that traditional portrayals of beauty didn't feature women like her.

"I grew up in a world where a woman who looks like me -- with my kind of skin and my kind of hair -- was never considered to be beautiful," she said in her last response before she was crowned. "I think it is time that that stops today."

Tunzi told CNN it's important that young girls look at the history-making quintet to see that anything is possible.

"We can't be what we cannot see," the 26-year-old from South Africa said. "I think that's why this is so important, because then young girls can look at us and feel like they, too, are important."

But don't think these beauty queens are token winners based on their race. Had that been the case, we wouldn't have seen three black Miss USAs since 2016, said the reigning Miss USA, Cheslie Kryst.

"Three of the last four Miss USAs were women of color -- there was Kara McCullough, there was Deshauna Barber -- and that was important for me to see," said Kryst, an attorney who does pro bono work for wrongfully sentenced inmates.