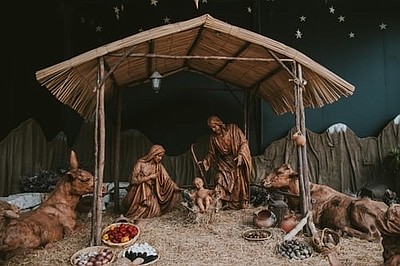 Recently, a preacher from Delaware was on YouTube calling Christians “heathen” for claiming that Jesus was born in December. He declared that he had the proof. His proof was taken from St Luke’s Gospel, Chapter One and verse 26 where it is clearly written: “In the sixth month The Angel Gabriel was sent to a city of Galilee named Nazareth, to a virgin betrothed to a man whose name was Joseph, and the virgin’s name was Mary.”

The preacher then continued to prove his case. He said emphatically that the sixth month was June. And that is true for our calendar which is solar (sun) based. But it is not true for the Jewish calendar, now running for over 5,700 years, which is lunar (moon) based.

See, for us, our year begins in January and the sixth month is indeed June. But for the Jewish people (and Jesus and the writers of the New Testament were Jewish and functioning off the lunar calendar), their year begins roughly between September 19 and October 17, give or take a day or two.

If what is stated above is true, then the “sixth month” when the Angel Gabriel appeared to Mary suddenly becomes mid-March to mid-April. Jesus would have been conceived in March and if one counts nine months forward—the time it takes before a baby is naturally born, we can and indeed MUST conclude that Jesus was born in mid-December to mid-January time period.

The first Christians, when they placed the time of the birth of Jesus were most certainly aware of the time the Bible says Jesus was conceived—in the sixth month! But they were Jews, and their first month was September! That is why in the calendars of the Roman and other Catholic Churches, March 25th is celebrated as the Feast of the Annunciation, their sixth month and exactly nine months before December 25th, which is Christmas Day—a fixed, rather than moveable feast for Christians.

Amazingly, some parts of the Christian Church actually celebrate January 6th as being more important than December 25th. And they have been doing this for centuries now! All this is still within the time frame of how the Jewish calendar would have served to place the conception of Jesus as being in the sixth month on the Jewish calendar and Jesus’ birth coming nine months later.

Christians therefore need not be doubtful about Christmas and its dating. It is dated correctly according to the Scripture, Luke 1:26 and the Jewish Calendar whose New Year often starts in September.

While we are on the topic of dating Christmas, here is another theory about how it was dated in ancient times:

It is said that ancient peoples believed that great Religious folk died on the day they were conceived. The early Church believed that Jesus died on March 25th, the first Good Friday. Enterprising scholars could actually check this out by researching whether there was a Jewish Passover on what would have been March 26th in the year Jesus died. We know that Passover and Easter could never come before the Spring Solstice because it was only after the first Full Moon after the Spring Solstice that Passover, and consequently Easter could be dated.

If it were indeed true that ancients believed that great Religious folks died on the day they were conceived, and Jesus was known to have died on March 25th, then its an easy count from the day of conception—March 25—to the day of birth, 9 months later, December 25th.

This is just another argument to help Christians gain more confidence in the factual basis of their faith which is often ridiculed and attacked in these modern days. The Christian Faith is grounded in historical facts about a man who was born, most likely in December and crucified most likely in March. We know that he was born; and we chose to celebrate his birth on December 25th without apology. We know He died at Passover time, and we believe he arose from the dead Easter Day.

So, Merry Christmas and a Happy New Year!