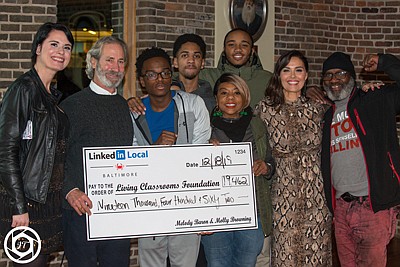 Living Classrooms Foundation, a Baltimore- based non-profit educational organization, has announced that they have received a donation for more than $19,000 from LinkedIn Local Baltimore.

Living Classrooms Foundation officials said the organization has a distinctive competency in experiential learning— literally learning by direct experience, or “learning by doing.”

LinkedIn Local, a global community in over 650 cities, spanning over 80 countries and every continent, created by LinkedIn users are designed to take online professional relationships offline to get to know the person behind the profile.

Melody Baron and Molly Browning co-host the events and advocate for the foundation. Baron was awarded as a Rising Star with the foundation in 2017 and currently serves as co-chair of the Associate Leadership Council.

“It has been remarkable to bring Australian founder, Anna McAfee’s LinkedIn Local concept to Baltimore,” commented Baron, according to a news release.

“We launched here in January 2018 and I have met so many wonderful people, had the privilege of taking everyone who attends our events on a tour of Baltimore and learned so much along the way. I’m grateful for the opportunity to give back to the community through these events,” Baron stated.

“Networking events are quite the trend here in the Baltimore area. Connecting with others and building solid relationships as a way to help non-profits is a win for everyone,” she said.

LinkedIn Local Baltimore celebrated the holiday by presenting a check to James Bond, president of Living Classrooms Foundation at its headquarters at the Frederick Douglass-Isaac Myers Maritime Park in Fells Point.

Established in 2009 in South Baltimore, Masonville Cove is the nation’s first Urban Wildlife Refuge Partnership, and home to a state-of-the-art green building nature center; a canoe and kayak launch; a fishing pier; a bird sanctuary; and beautiful waterfront public trails.

The campus acts as a gateway to connect underserved communities to the outdoors and the Chesapeake Bay ecosystem through environmental education focused on the local watershed.

The 20-year-old Moore said, in his neighborhood, individuals are “lucky to live and make it to 18.”

“They don’t show my neighborhood during halftime or during the Ravens game commercials. My middle school time with The Living Classrooms Foundation gave me a look at the other side of Baltimore where people were privileged to live beyond the death, pain, and other struggles, a part of growing up,” Moore stated. ‘

“I grew up the youngest of five siblings, and while my mother was at work and my father was absent from my life, I became disengaged from high school. I was running the streets in my neighborhood,” he stated.

Moore said he had to learn how to outthink his surroundings, and look beyond what he sees with his eyes.

“I’m now in college, an award winning youth leader, writer, and motivational speaker. But, most importantly, I’m a big brother to broken kids in those same streets in my neighborhood with the organization ‘Challenge 2 Change,’” he said.

He said his success will never be measured by accolades, television appearances, or degrees.

“For me, I never wanted to make it out of my city, but make it better. Partnering with the resources and the existing work of the Living Classrooms Foundation, a better Baltimore is on the way,” he said