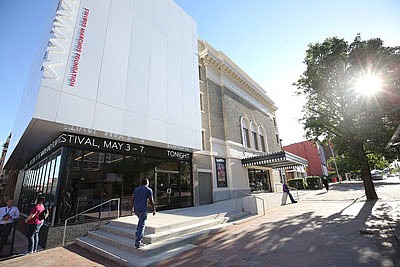 The Central Baltimore Partnership (CBP) is a nonprofit with over 100 partners who together established a comprehensive strategy for community revival in 11 central Baltimore neighborhoods. (Above) CBP worked with their partners to help bring the Stavros Niarchos Foundation Parkway Film Center located at 5 W. North Avenue to fruition.

In a city inundated with crime, dilapidated houses, drug addiction and many other issues, Baltimore is often viewed as a hard sell for attracting and retaining business owners and homebuyers. However, one local organization has been quietly making a lot of noise when it comes changing this troubling reality— the Central Baltimore Partnership (CBP), a ten-year-old nonprofit with over 100 partners who together established a comprehensive strategy for community revival in 11 central Baltimore neighborhoods.

Formed in 2006, the Central Baltimore Partnership’s mission is to galvanize the renaissance of Central Baltimore. It pursues its mission by partnering with neighborhood organizations, non-profits, educational institutions, businesses and government agencies.

“We work with all the stakeholders in these eleven neighborhoods,” said Ellen Janes, executive director of Central Baltimore Partnership. “That includes educational institutions and city and state government. We bring everyone together, and it’s all about a comprehensive revitalization strategy. We set priorities, and make them happen. We create inviting spaces, work with community centers, and connect residents to job opportunities.

“A lot of what we do is resource development such as fundraising. We also look to partner with other organizations doing similar work. We have had great success. Over 1 billion dollars has been generated in new investments. But we also want to create new opportunities. We want to make life better for long-time residents and businesses, and also attract new residents and businesses.”

“From lots to playgrounds to vacant theaters, we go the gamut,” said Janes. “That’s what makes a successful revitalization. You have to do many things simultaneously to turn these communities around, and small businesses are a critical component of that strategy. Public Safety is a big part of what we do. We work with the Baltimore City Police Department, community organizations and others.”

She added “Lighting and patrols are very important, but we are also focused on creating job opportunities for youth. In other words, we help channel the collective energy of Central Baltimore into projects and programs that will have a positive effect on the community as a whole.”

CBP is located in the Center for Neighborhoods at 25 E. 20th Street in Baltimore. The organization has worked on many notable projects with their Partners. Projects include The Motor House, an arts hub, gallery, and performance space located at 120 W. North Avenue and Stavros Niarchos Foundation Parkway Film Center, a movie theatre located at 5 W. North Avenue. Both were initially vacant buildings. Others projects include City Arts Apartments, Miller’s Court, North Avenue Market Restoration, and The Centre.

“These are such wonderful projects,” said Janes. “We were part of the team that helped bring The Centre Theater back to life. The Center now houses non-profits, a joint film program of John Hopkins University and MICA, and gaming developer Sparkypants. We also helped in creating the Central Baltimore Future Funds with a group called the Reinvestment Fund, which is a ten million dollar loan fund for projects that want to start-up in central Baltimore. They have a number of business projects that they are working on. Those are some of the biggest projects we are working on with our partners.

“We also have spruce-up funds, which provides money to community groups to develop vacant lots. That program is being replicated in six different parts of the city. It turns blight into real neighborhood treasures.”

Janes also noted The Made in Baltimore Pop-Up Shop, which aims to spur re-investment in Baltimore City by growing the market for locally produced goods and supporting over 50 local makers and manufacturers.

CBP has also established The Neil Muldrow Business Development Fund. The Fund aims to support small businesses who expand or locate in Central Baltimore. The Fund is especially targeted towards those who re-develop long-vacant properties requiring significant new investment. Muldrow, who worked for The Baltimore Times, served as a CBP Board Member up until his death last October. The Fund will help preserve Muldrow’s rich legacy of supporting minority-owned businesses.

“Given Neal’s concern about minority businesses, he was especially concerned about the Charles Street corridor,” said Janes. “We have addressed that concern. At Neal’s urging, my staff helped to create the North of North Business Association, which is starting to take hold. That is the area between North Avenue and 25th street. Just like Neal, we want to share our thinking and relationships.

“Central Baltimore Partnership is connecting the small pieces, which includes making our bus stops, gathering places, parking, and streets more inviting. These activities will complement the Fund. We try to pull all the pieces together to make a healthier community. The most effective way to make our area safer, is to attract more people to come.”