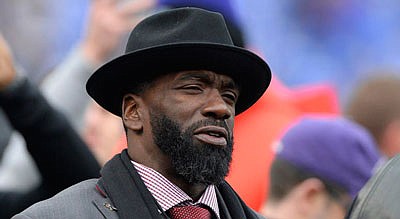 Former Baltimore Ravens safety Ed Reed is perhaps the best ball-hawking safety of all time. His 64 interceptions (6th All Time) in 174 games are proof. He also has 139 pass breakups on his resume and his 1,590 interception return yards are the most ever by a defender. Courtesy Photo/USA TODAY Sports Images

The Baltimore Ravens have always been known for defensive excellence. Linebacker Ray Lewis has had his share of running mates on defense during his Hall of Fame career. Safety Ed Reed is the first fellow defensive player to join Lewis in Canton, Ohio.

Like Lewis, Reed was a game changer for Baltimore's defense. The two players infused a high degree of swagger into the Ravens. It's something they cultivated while playing football for the University of Miami and led to a Super Bowl Championship in 2013.

Reed is perhaps the best ball-hawking safety of all time. His 64 interceptions (6th All Time) in 174 games are proof. Reed also has 139 pass breakups on his resume. Few players were as dangerous as Reed once they got their hands on a turnover. Reed's 1,590 interception return yards are the most ever by a defender.

The legacy that Reed has includes nine Pro Bowl selections, five First- team All Pro nominations and being named to the NFL 2000s All-Decade Team. He was also named the 2004 NFL Defensive Player of the Year.

There is no questioning Reed's greatness on the football field. However, his Hall of Fame personality and contributions off of the field are equally as great.

Reed's compassion for others came to the surface when he spoke with Fox Sports' Joe Buck at an event during the week leading up to Super Bowl LIII earlier this month.

"We have volunteer firefighters here cleaning up after grown men. Lockers are two feet from the garbage can. You come in and cut the tape off your feet, your ankles, your wrist and instead of throwing it in the garbage you throw it on the floor," Reed said.

"I'm like, 'Listen guys it's the little things man!' Pick up your towel as you're walking out. The dirty clothes bin is right there as you walk out. Why leave the towel in there for someone else to pick up?! Super Bowl year, we don't win it if we don't do the little things."

Reed went on to say how he'd pick up the towels and the trash because he didn't want the volunteer firemen tasked with cleaning up the locker room to see how messy his teammates were.

Passion for helping others was manifested when Reed created The Ed Reed Foundation. The mission statement is to “provide character-building opportunities by inspiring at-risk youth with athletic initiatives founded in mentorship, leadership, and exposure to new environments.”

As a child growing up in a family of five, Reed took to sports as a way to show how special he was. He was a standout in football, track and field, basketball, and baseball.

Reed' s Foundation focuses on children who simply need an opportunity to see how special they can be.

"If we surround ourselves with the right people, in the right environment, our opportunity for success increases greatly," Reed says on his foundation's website.

Reed's foundation is involved with communities in Baltimore and the New Orleans area, where Reed is from. His latest project is building a multipurpose turf field and basketball courts near the Preston Hollow and Turtle Creek Neighborhoods in Louisiana where he grew up. The park will also have an open area for cookouts, a playground for children and a new road into the park.

For more information about The Ed Reed foundation, visit the website: www.edreedfoundation.org

Ed Reed, the football player will be enshrined in the Pro Football Hall of Fame in August but there is much more to him than the dynamic defender most people know him as.