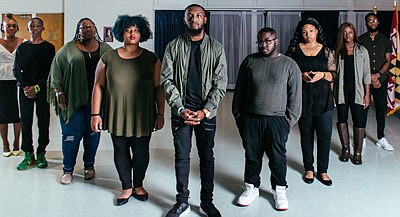 This past Saturday, February 2, 2019, I had the chance to see Robert Wooden III & Levite Praise (RWLP) perform at their very first concert at Concord Baptist Church in Baltimore City. I'd like to get right into my experience— it was a roller coaster that kept going up and up and the only dip was that the show had to end!

Over the past year, I've heard and seen snippets of RWLP on social media, and in person coincidentally at Morgan State University during one of their many

rehearsals. When I was found out the group would be putting on a show for the public, I was immediately interested and wanted to know where and when the show would be taking place.

Fast forward a few months and it was finally showtime. When I walked into the church, the excitement in the room was an undeniable. Everyone was completely attentive and on the edges of their seats— literally.

There were a few opening acts before RWLP hit the pulpit. Three voices that stood out the most to me from the opening acts were Jamielle Gilman, Jamaal Whittington and Terrance Smith. All three were exactly what you want in a gospel singer— a voice that can fill up the room, passion for the Lord and an understanding of not just praise, but the word of the bible.

We've all been to shows where we dreaded listening to everyone before the headliner, counting the minutes until the person you came to see and hear is on stage. However, let me say that there wasn't a moment when a performer on that stage didn't own their moment. I have to give immense credit to the producer and promoter of the event who happens to be Robert Wooden III himself.

When asked how is he able at 20-years-old to gain the respect of his peers and maintain his leadership role in the group, he responded, “You can't receive respect if you don't give it. I showed my peers the same respect I expected. I’m so blessed to have such great people around me. Once they saw my dedication and how serious I was about this show, they were all in with me.”

There was a true continuity and chemistry within RWLP. The smiles on everyone's faces on stage made me feel their energy as an audience member. I too felt the urge to be joyful, and I surely was. With the band adding just that extra level of emotion to every syllable being sung and every melody expressed, I was overwhelmed by the amount of emotion in the room, I stood during their entire set. Even my close friend Muammar Muhammad was on his feet with me during the final hour of the show.

What really took the audience over the edge of a praise break was RWLP’s song titled: “The Best Day.” Robert’s voice assertively but beautifully glided through every inch of this piece. When the intensity of this piece reached it’s peak, Robert began to jump up and down, his energy was contagious, and had me and many others jumping along as well.

At the end of this show, I was completely amazed by the whole two and a half hours of high-powered praise that I had just been apart of.

When asked about some of the difficulties of putting a show together like this and what would his advice be for a first time show developer looking to put on their own event, Wooden said, “My advice would be always have God in your mind when making plans. Make sure you communicate clearly with everyone, such as your show manager, your musicians, and your sound engineer.”

Lookout for RWLP's debut EP scheduled to be released on March 22, 2019.

The group currently ministers at New Solid Rock Fellowship Church, located at 4003 Northern Parkway on the second Sunday of every month. Everyone is very welcome to come out and worship with us.