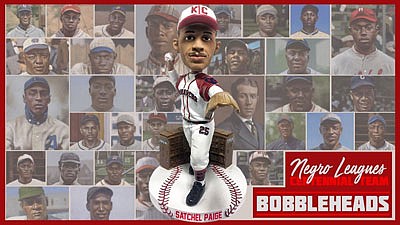 Satchel Paige was the star for the Kansas City Monarchs while Willie Wells and Cool Papa Bell were the pride of St. Louis, and Cannonball Dick Redding turned heads in New York with the Lincoln Giants.

Keeping the legacy of the Negro Leagues and its players alive is vital, according to Phil Sklar, the co-founder and CEO of the National Bobblehead Hall of Fame and Museum.

“Every future generation must know that there was a time when people with equal, or in many cases superior, skills couldn’t be on the same field solely because of the color of their skin,” Sklar said.

To that end, a Kickstarter campaign to create a series of officially licensed, limited edition bobbleheads to celebrate the 100th Anniversary of the founding of the Negro National League has raised over $67,000, easily topping its original $10,000 goal.

The project was launched in December in connection with the Negro Leagues Baseball Museum in Kansas City, Missouri, by the National Bobblehead Hall of Fame and Museum and Dreams of Field, which organized to promote the Negro National League Centennial in 2020.

“I want these bobbleheads to spark discussions and educate people about the Negro Leagues and struggles and triumphs of the players,” Sklar said. “The Negro Leaguers had so many stories to tell and most of the players are gone, but the bobbleheads will play a part in keeping their legacy alive for a very long time. There are still so many injustices and cases of discrimination related to race and other factors, but teaching the story of the Negro Leagues and its players could really make a difference.

Now that the campaign has reached the $60,000 mark, backers are in line to receive an exclusive commemorative ticket that provides a $2 admission discount to the Negro Leagues Baseball Museum during the Centennial Exhibit, and the first Milwaukee Bears bobblehead will be produced.

Since the campaign topped the $60,000 mark, the production process began for several more of the bobbleheads. Each bobblehead in the series is individually numbered to 2,020 and come in a collector’s box with a “back story” of the player.

Bob Kendrick, president of the NLBM, announced the team in conjunction with Jay Caldwell, founder of Dreams Fulfilled, as the Kickstarter launched.

Each player is being depicted on a baseball-shaped base with a replica of Kansas City’s Paseo YMCA, the site where the Negro National League was organized on February 13, 1920.

Satchel Paige was the first player selected, and his bobblehead has been completed.

Paige will be joined by 10 additional pitchers, three catchers, five outside infielders (1B, 3B), three inside infielders (2B, SS), seven outfielders, one utility player, a manager and an owner as voted on by an on-line poll and supplemented by five additional players.

“We are thrilled to commemorate a historic number of former Negro League players with bobbleheads, which are the ultimate honor,” Sklar said.

“Many of these players have never had bobbleheads, and these bobbleheads will help ensure that their legacy and vital contribution to baseball and society is always remembered. We have been overwhelmed by the excitement for the series and can’t wait to produce and distribute them.”

Jay Caldwell, founder of Dreams Fulfilled, said The Negro Leagues Centennial series will “bring long overdue recognition to players who were not only among the best to ever play the game, but also early civil rights pioneers who helped pave the way for integration in baseball and the country.”

To learn more about the campaign, visit https://www.kickstarter.com/projects/bobbleheadhall/negro-leagues-centennial-team-bobblehead-series.