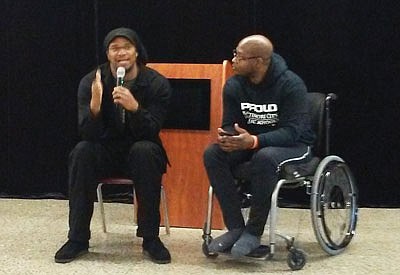 Keynote speaker Etan Thomas and his cousin William, discussing the power of fatherhood and family engagement before a crowd of fathers in the cafeteria of Frederick Douglass High School in West Baltimore Demetrius Dillard

Baltimore City Public Schools (BCPS) joined a host of partners to conduct the first-ever Fatherhood Engagement Summit at Frederick Douglass High School in West Baltimore on January 12, 2019. The power of black fatherhood was put on full display, as the function attracted dozens of dads from Baltimore City and surrounding vicinities.

“This is a priority of ours. Dads, you know, are an untapped resource in Baltimore City, specifically in our school system,” said Shana McIver, one of the lead coordinators of the fatherhood summit. “At the school level, we know dads want to be involved, we just have to show them how. We also have to help them remove any barriers they may have to being engaged in their children’s lives.”

Family engagement manager with Baltimore City Public Schools, Shana McIver said that she and her colleagues have always worked with a pointed focus on fatherhood engagement. She further said that about 30 partners, comprised of nonprofits and grassroots organizations, partnered with the public school system to shape the fatherhood event.

“So at City Schools we believe that if we offer opportunities to build trust and build relationships with dads, and we engage them, and allow them to have a voice in what’s happening with their child and their school communities, then it will yield authentic engagement and dads can help us support school improvement, but ultimately student success,” said McIver.

An abundance of vendors and resources were available for fathers— some of which were unconventional, such as the ‘silent yoga’ exhibit. Workshops and information sessions covered a wide array of topics, but mainly focused on how fathers could be more involved in their child’s education and academic pursuits.

“I really believe family engagement is a major strategy if we want to reduce a lot of the challenges that we’re having in this city,” said David Miller, the founder of the black-male focused Dare to Be King Project initiative. “Dads in the city of Baltimore are telling us that because of stress, the trauma, seeing all of the homicides and the other things going on in the city, that they need resources. So the Baltimore City Public Schools, my organization, the Center for Urban Families, and 25 to 30 other partners said, ‘Why don’t we create a day for dads to come out to get every conceivable thing that they need - whether it’s housing, whether it’s mental health, whether it’s substance abuse, whether it’s employment…’ We’ve got everything they need.”

Most importantly, a man of physical stature (he stands 6-feet-10-inches) and stature in the black community highlighted the event with words of enlightenment for the fathers and children in attendance.

Etan Thomas, an author, poet, social activist, motivational speaker and former NBA forward made his way to Baltimore to share insightful thoughts on the importance of black fatherly engagement.

“I came today because there’s so much that we as fathers, as men in the community, have to step up and be able to prepare our children for what they’re going to face throughout society. And that’s really the topic of what I’m talking about,” Thomas said. “There’s always a lot of work to be done and always a lot of things to talk about. So when I heard about this project that [David] Miller was putting together— it was definitely something I wanted to be a part of.”

Thomas, a resident of Bowie in Prince George’s County, also gave away signed copies of his most recent book entitled “We Matter: Athletes And Activism,” (2018) free of charge. The literary work features interviews with numerous prominent sports figures, and serves as inspiration for sports enthusiasts, parents seeking positive messages for the children, and activists interested in hearing athletes use their voices to advocate for social justice.

About midway through the summit, Thomas and his cousin, William Thomas, led a discussion surrounding the importance of black leadership from a parental perspective. Etan Thomas, husband and father of three shared some personal experiences and offered advice to the men who sought counsel during the discussion.

Many fathers in the Baltimore community suffer in silence but with a connection to vital resources, local leaders feel that holding functions such as fatherhood engagement summits move black fathers and husbands one step closer to recognizing and their true value.

It is likely that Baltimore City Public Schools will hold fatherhood engagement events in the near future, according to McIver.