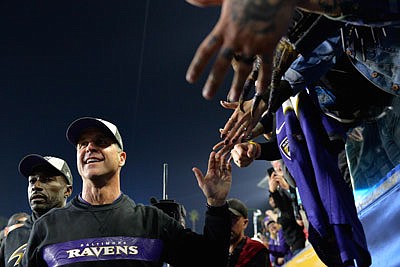 The Baltimore Ravens reportedly agreed to a contract extension to keep head coach John Harbaugh around beyond the 2019 season. The decision to keep Harbaugh in place was a wise move by new General Manager Eric DeCosta. Courtesy Photo/NFL.com

The Baltimore Ravens reportedly agreed to a contract extension to keep head coach John Harbaugh around beyond the 2019 season. The decision to keep Harbaugh in place was a wise move by new General Manager Eric DeCosta.

After a mid-season turnaround that led to an AFC North division title, the arrow is pointing up for the Ravens. Harbaugh has a 104 - 72 record in the regular season in 11 years as the head coach. Baltimore has reached the playoffs in seven seasons under him.

Harbaugh is not only the most successful coach in team history but he is also the best man for the job moving forward. There were cries for Harbaugh to be relieved of his head coach duties when the Ravens were struggling through a three-game losing streak in October.

Often times, fans will call for a coach to be fired without having a valid candidate as a replacement. None of the prospects that landed head coaching jobs are of Harbaugh's pedigree.

Harbaugh is a proven commodity ideally suited for Baltimore. It starts with his blue, collar mindset. Under Harbaugh, the Ravens forged an old school, smash mouth identity. They play stifling defense and look to pound the football on offense. Any team facing the Ravens know they're in for a dogfight.

Team unity is another core value. Even when things are bad, the Ravens don't point fingers at each other. You never hear any rumors of division coming from the locker room.

The most glaring example came in 2018 when the torch was passed from starting quarterback Joe Flacco to back up Lamar Jackson. As a first-round pick, it was only a matter of time before Jackson took over as the starter.

Jackson was rushed into action when Flacco injured his right hip and missed two games starting in November. The Ravens proceeded to win three games in a row with Jackson under center. Faced with a tough decision, Harbaugh decided to stick with Jackson when Flacco was healthy enough to return.

The decision signaled the end of Flacco's reign in Baltimore. No one flinched or publicly questioned Harbaugh's decision to move on from the former Super Bowl MVP. That's a sign that the organization is on one page with Harbaugh in control of the locker room.

Making a move of that magnitude took guts but Harbaugh was convinced that Baltimore was better off with Jackson leading the way. He put himself at risk by going with Jackson.

Early returns paid off with Jackson playing a key role in the Ravens' 6 - 1 record with him as the starter.

Harbaugh was faced with another tough decision when Baltimore was down 17 - 0 to the Los Angeles Chargers at home in the first round of the playoffs. Jackson was given the green light to finish the game and got the Ravens back to within a touchdown thanks to some fourth-quarter heroics.

Even though they lost the game, none of the Ravens players questioned Harbaugh's decision not to put Flacco in the game. The same can't be said for some of the fans that chanted Flacco's name hoping he would be inserted into the game. Veteran cornerback Jimmy Smith even came to Jackson's defense.

"I love Joe Flacco," said Smith after the game. "But No. 8 [QB Lamar Jackson] got us here. So for the fact that you're a fair-weather fan that quickly when things get rough, you turn your back on him, that got under my skin a little bit."

Harbaugh's decision to make tight ends coach/running game coordinator Greg Roman the offensive coordinator is a move that was made with Jackson's future success in mind. For Harbaugh, all that matters is the team's success. Taking play calling responsibilities away from Marty Mornhinweg and giving him a passing game coordinator role wasn't an easy decision, especially considering that their time together dates back to when they were both assistant coaches for the Philadelphia Eagles under Andy Reid.

Harbaugh has made it a point to surround himself with the right coaches and not get in their way. He has earned the respect of everyone in the organization and in the Baltimore community. That in turn has earned him the opportunity to continue leading the Ravens.