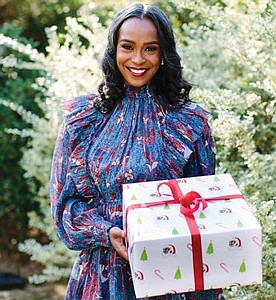 It was just about this time three years ago when Jackie Rodgers seemingly traversed the nation looking for wrapping paper that featured a black Santa Claus for her then two-year-old son Elijah’s Christmas gifts.

After her unsuccessful solo search, she turned to her friends and family members – they too had no such luck. So Rodgers and her husband, Shaun, took matters into their own hands and started Greentop Gifts, a company that creates diverse holiday products – including wrapping paper that features a black Santa Claus.

“As a mother, I wanted something that my son and our friends and their families could enjoy and look at for years to come. Because that didn't exist, each year we would color Santa’s face with paint or markers,” Rodgers said.

“The clear problem that families like us face is a lack of diverse images on Christmas-themed wrapping paper. So we decided after going through this exercise one too many holiday seasons that we would solve this problem and make our own.”

The business features an array of options – apparels, gifts, and wrapping paper.

And, oh by the way, her St. Nick is named “Clarence Claus,” and Greentop Gifts even has a “Clarence Clearance” where shoppers can find holiday products at a discount.

“Christmas is coming early. We are excited to share Clarence Claus,” Jackie Rodgers states. “Clarence represents what we were missing during the holiday season – wrapping paper and products that feature the ‘jolly’ old man from the North Pole that looked like us.”

Clarence Claus, who’s fast growing in popularity, is emblazoned on socks, mugs, t-shirts, and numerous other items found on the Greentop Gifts website.

Reportedly, Clarence Claus has even become a favorite of popular CBS Morning News Host Gayle King who, according to People Magazine, shared an Instagram photo of herself last year in a Clarence Claus sweatshirt.

King’s message of support is similar to the feedback Rodgers said she’s received.

“People are really excited and they tell me that this is what they’ve been looking for,” Rodgers said “I think the most rewarding part is hearing parents talk about how they also find it important for their children to have images that look like them,” she said.

“It’s good to know that I'm not the only one. And, it’s important for all kids to understand the importance of diversity.”

Rodgers noted that there’s even more to look forward to in the future from Greentop Gifts.

“I'm very intentional about the images that I show my kids. I want them to see diverse images in all things,” Rodgers said.

“It's extremely important to me that they see diversity and understand the importance of it. As Greentop Gifts grows, we hope to continue to show more diverse images for all children to see. Seeing people of difference appearances and abilities is important for all children, not just African American children."