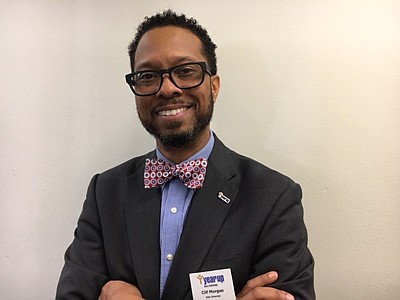 Clifton Morgan, site director for Year Up Baltimore, a college and career development program for low to moderate-income students between the ages of 18 to 24. Approximately 83 percent of students who complete the program are employed and earn about $17 per hour. Courtesy Photo/Year Up Baltimore

Clifton Morgan has worked at Year Up Baltimore for nearly a decade, and one of the primary challenges he says is getting people to believe is that the program is authentic.

“People think it’s a scam. They often think it’s just too good to be true,” Morgan, the site director for Year Up Baltimore said.

Because much is offered— and consequently, much is expected— Morgan says he understands the initial skepticism.

“So, you’re telling me that I get to go to school, and I’ll be taken care of? That’s what I hear in addition to, ‘you’re going to give me a stipend to come and train, and learn how to work? You’re going to train me, and then you’re going to send me on an internship?”

Year Up counts as a college and career development program for low to moderate-income students between the ages of 18 to 24.

The students earn money while they learn, and officials say that the training they receive at Year Up is imperative because an estimated 12 million jobs requiring candidates with post-secondary education will go unfilled in the next decade.

Morgan and others at Year Up say to solve that dilemma, they must connect young and underserved individuals with opportunities to work for companies who need their talents.

Year Up officials speak with companies to better understand the skills needed and participants spend six months in a classroom learning the hard skills sought by employers and the soft skills successful team members need.

Students then intern for six months with a Year Up partner company, applying their skills while gaining critical work experience. When they graduate from the program, students are then prepared to embark on a career that pays life-sustaining wages.

“We support our students with coaches and mentors as well as a student services support team. For example, we now do soft skills training, and we hold high expectations for the contractors we work with,” Morgan said. “We do deliver on the internship opportunities in the professional environment and allow our students to gain the skills necessary to move into other full time opportunities, if there isn't one available.”

Year Up recruits two classes of 120 students per class each year, which begin in January and end in August.

The students spend six months in a learning and development phase at Baltimore City Community College (BCCC). The next six months are spent working as an intern in one of Year Up’s dozens of sponsors who are associated with the program.

Approximately 83 percent of students who complete the program are employed, and earn about $17 per hour. It’s all more reason for Morgan to remain excited about Year Up.

“It’s about the light bulb moments that I have when I see some of our young adults,” said Morgan, who grow up in Chicago and later graduated from Hampton University in Virginia.

The married father of two recalled his upbringing and contrasted it with many of his Year Up students.

“I was born and raised on the south side of Chicago, and I’ve been in Maryland for the last 13 years; and the thing that I think is interesting is that people believe no matter where you go— our young adults are the same. But, as a young kid in Chicago, I was looking for an opportunity for a better life,” Morgan said. “Fortunately for me, I was able to go to school and that worked out. And here I am. But the thing that I say to that young man who left Chicago is that he really thought he had a clear plan, an idea of what his life was going to look like. But, I'm majoring in something that I've never worked in. But I found the interest that I have in working with young adults in education in higher education.

“And I'm able to do that every day; and help our young adults figure out how to navigate situations that sometimes can be difficult.

“To see the light bulbs go off for somebody who struggled and kind of pulled themselves together, remain focused and display that grit and then achieve an internship and get hired in that job or even have multiple offers for different job opportunities at the end of the program…those are the things that get me going.”

For more information or to apply to participate in the Year Up program, visit www.yearup.org/Baltimore or call 410-919-9530.