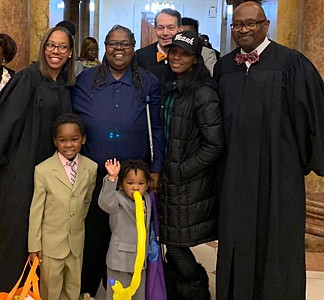 If you told 56-year-old Belair-Edison resident Elladonna Lanier two years ago that she was going to be a parent, she would have said it was never going to happen. Fast forward to last weekend, she is now officially the proud mother of two brothers, Mitchell, who is five-years-old, and Messiah who is two-years-old.

“This is the greatest thing that has happened to me,” said Lanier. “I am now on a journey with two amazing boys who show me every day what unconditional love means.”

Lanier was just one of a number of families who gathered at The Clarence Mitchell, Jr. Courthouse to celebrate the finalization of their adoption process during the Bar Association of Baltimore City’s National Adoption Day November 23, 2019.

Lanier started the process in 2017 when she took the kids into her home when a family member could no longer care for the boys. “I said to myself, I could either step in, or risk these babies going into foster care and being split up. It was an easy choice for me,” said Lanier.

This is the 19th year the Bar Association of Baltimore City has partnered with the Department of Social Services to salute new families. This year 32 children between the ages of one and 14 found new permanent homes.

“We’re trying to change the dynamics for children, so it really starts at the home,” said event organizer Ashley Ward. “If we can make their home permanent, and give them that stability, we’re helping one child at a time have a better future, by starting with a stable family.”

The Bar Association holds the event each year on the Saturday before Thanksgiving. The purpose is to not only celebrate the finalization of adoptions that day, but to also raise awareness that more than 100,000 children nationally are in foster care waiting to find a family to call their own. According to the Baltimore City’s Department of Social Services there are nearly 1,700 children in the foster system in Baltimore.

Dawnyell Harris just finalized a three-year adoption process with her 4-year-old daughter Sage. “There are a few hiccups. The system is not perfect. But at the end of the day it’s about the kids,” said Harris. “All they want are love, hugs, kisses, and attention and that’s what we try to give them.”

Harris has adopted before. Her 14-year-old daughter Kristyana was once in foster care before Harris officially made her part of the family ten years ago. “It makes me feel like there’s humanity in this world because this world has been very negative lately,” said Kristyana Harris.

“This gives me a sense of hope that there are people that love other people, blood or not, and I think it’s just beautiful.” Harris said she plans to give the same love and support to her new little sister Sage.

Teri Alston, program manager for adoption and guardianship for the Baltimore City Department of Social Services, said adoptions do more than just benefit an individual family. Alston has been a social worker for 23 years, and has witnessed the unfortunate outcomes of children who grow up without families. “Our hope is with each family, they create and help develop a productive citizen who will give back to the city,” said Alston.

During the adoption ceremony, court judges called each family to stand before them to make the process official. Each child was welcomed to his or her “forever” family.

Joe and Lisa Jordan finalized the adoption of their daughter Kendall. Having both worked for the state, they saw the countless children who were lost to the system, and wanted to adopt as a way to give back. After nearly three years, the family was able to finalize the process. Kendall left the courthouse with a new last name and an official family.

“There are so many kids in need of love and attention, and it doesn’t have to come from your birth parent to get that,” Harris said.

Lanier said she knows, like all parents, there will be some growing pains, trying to raise a new family, but she said she has a lot of support from friends and her church family who have been “wonderful.”