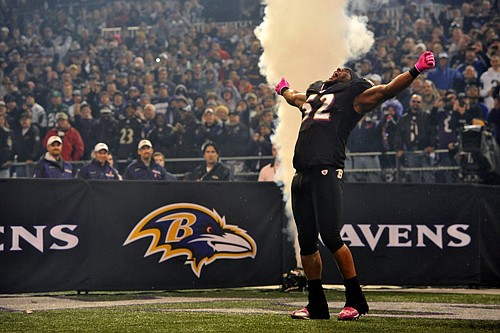 Seven seasons have passed since the last time Hall of Fame linebacker Ray Lewis suited up for the Baltimore Ravens.

Lewis was known for his intensity and legendary work ethic. He's bringing that same intensity to a new program called the 52 Card Challenge.

Lewis developed a workout using a deck of cards when he was a child. He wanted to get strong so he could protect his mother from being abused by his stepfather. The strength he developed led to him not only protecting his mother, but he also became one of the best football players ever and was able to provide for her financially as well.

Ironically Lewis wore number 52. There are 52 cards in a deck. Lewis would shuffle a deck of cards then pick one and do push-ups according to the cards he drew. Any face card was worth 10 pushups, an ace was 25 pushups, and a joker was 50.

The 52 Card Challenge is an opportunity for people to emulate Lewis' workout. His social media account encour- ages people to go to teamnoexcuses.tv and sign up. The first thing that appears on the page is an image of Lewis yelling with the phrase, "Be inspired for greatness! Never be comfortable with just good enough."

There are few athletes in sports who are credited for being a more intense leader than Lewis was in his 17 seasons with the Ravens. Through his site, Lewis is challenging others to be a leader by registering a team.

The site says the following:

Lewis strongly believes that incorporating physical movement into your daily routine will help you build confidence, character and discipline, so you become a better version of yourself in everything you do. Team No Excuses Members receive a new workout every weekday, built from the cards that Ray draws each Monday. Every day each suit represents a different exercise, and the number on the card is the number of times you perform the exercise. Ray developed his cards workout method as a young child, and it has stuck with him every day of his life. He still does his cards workout once a day, and credits the cards for a lot of his success in life.

The new workout has different parameters. Jokers call for 52 pushups while the Aces call for squats, lunges, jumping-jacks or sit-ups depending upon the card.