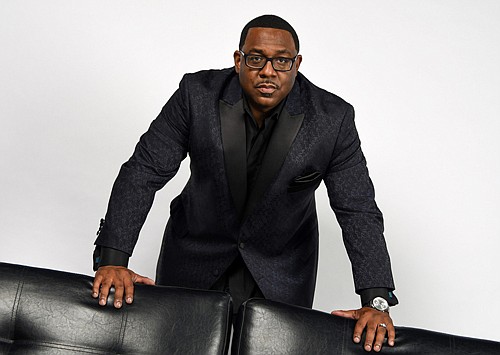 Ron Ward, Jr’s newly released project has been garnering excellent reviews. Entitled “Ron Ward Jr. And Friends,” the album features the talents of local musicians and singers who joined creative forces with the Anne Arundel County resident. Up to nine of them have played with him when he has performed in-person. “What the World Needs Now” is a popular, original song, which serves as a reminder that the world needs more positivity. This project marks Ward’s fifth smooth jazz album intended for all music lovers to enjoy, while taking their minds off these stressful times. The musician likes to make feel-good music that anyone can enjoy. Photo credit: DHM Multimedia/Michael Anderson

Although music events have been cancelled around the globe, due to COVID-19, artists have found ways to still uplift their audiences, near and far. When Governor Larry Hogan informed Marylanders that our state was officially on lockdown, due to a stay-at-home order, an independent musician from Anne Arundel County chose to indulge in creative optimism. Ron Ward, Jr., Minister of Music at Asbury Town Neck United Methodist Church, located in Severna Park, Maryland, viewed the current times as a perfect opportunity to share his musical gifts inside and outside of the sanctuary.

In this unprecedented period of social distancing and the requirement for churches to worship with less than ten members, Ward shares his creative gifts online by playing the piano and preparing worship songs for fellow participants on Sundays, during the COVID-19 crisis. When Ward is not leading Rev. James Bishop, Sr.’s congregation through musical praise, the independent artist transfers his musical gifts to another space. Ward’s new album—which is entitled “Ron Ward Jr. And Friends”— is a project celebrating musicians and singers he plays with during his musical journeys.

“I did seven covers, and three original tunes that I wrote myself,” Ward said, referring to his latest project, which was released on March 24, 2020. “I like to try to make music to make everybody feel good, so everybody, no matter what age, from your elderly, to your middle-age (person), to your young adult, even down to your teens. Anybody who puts this album on can say, ‘Oh, I remember that song,’ and I gave them a rendition of it that is still relevant now, and I just put my Ron Ward, Jr. spin on it.”

The piano, flutes, saxophone, strings and violins combine with vocals to deliver classic R&B tunes ranging from Stevie Wonder to Beyoncé. Ward has a reputation of making high-quality music that his fans expect to enjoy. Once again, Ward does not seem to disappoint, while taking listeners beyond the walls of their homes, while quarantine is in full effect. Ward mentioned that he is dispelling the myth the pandemic rules out the possibility of successfully launching a project or product at this time. For Ward, digital copies of his album have been popular, although hard copies can be ordered from him.

“With the album (“Ron Ward Jr. and Friends”), for that one hour that you’re listening to the album, you’re going to go somewhere,” Ward said. “You’re going to sit back and just relax, and just enjoy, and take your mind off of things, if you choose to listen to the whole album.”

While staying at home due to COVID-19, many people have grown weary of overeating or binge-watching bad news updates, so more of the world may pause more often to savor music. Ward’s fifth solo album has been well-received. Sales were strong, even in the first week. Ward’s U.S. fans typically begin listening to his projects before others join the musical wave in places such as Switzerland, Norway and New Zealand.

“It’s just an interesting ride to be an independent artist right now. You have control over your career,” Ward said. “I just try to make some feel good music for anybody to listen to.”

Ward’s wife, Dor’Ray Ward, also feels good when she hears her spouse’s work. She has been juggling working from home with caring for a one-year-old and a 16-year-old, with her husband’s assistance. She supports her husband’s passion but the busy mother also feels that Ward’s eclectic music appeals to other mothers like her. The song “Joy” was dedicated to the couple’s daughter, Rylee.

“You have your slow music for when you’re cooking or helping the kids with homework, you have your up-tempo for when you’re cleaning or in the car, and then you have the music that you can relax and sing to,” Dor’Ray said. “Since I’ve been married to Ron, his music has touched me in so many ways. No matter what mood I may be in, I can always count on his songs to bring me joy.”

The Wards have been married for nearly two years. For a couple who has struck a harmonious musical chord, the pandemic serves as a reminder to find bits of love sprinkled with joy, even in challenging times.

“Seeing Ron create and implement music, and then seeing that come to fruition, is amazing. I am so proud of him and all that he has accomplished in his music career,” Dor’Ray said. “I haven’t listened to one song that I can honestly say that I don’t like. His music fits whatever mood I may be in. Whether I want to dance, sing, or go to church he provides it all.”