Celeste O’Connor, 21, who grew up in Baltimore County, portrays “Paloma” in the film “Selah and the Spades.” On April 17, 2020, Amazon Prime video began showing the film, which is written and directed by Tayarisha Poe. The film immerses viewers in a heightened depiction of teenage politics. Connor’s film credits also include “Irreplaceable You” and the independent film “Wetlands.” The talented actresses upcoming projects includes films with Universal Studios and Sony. Photos Courtesy of Amazon Studios

In the closed world of an elite Pennsylvania boarding school called “Haldwell,” the student body is run by five factions. Seventeen-year-old “Selah Summers” (Lovie Simone) runs the most dominant group, the Spades. The group supplies students with coveted, illegal alcohol and pills.

Tensions between the factions escalate, and when Selah’s best friend and right hand “Maxxie” (Jharrel Jerome) becomes distracted by a new love, Selah takes on a protégée, enamored sophomore “Paloma” (Celeste O’Connor), to whom she imparts her wisdom on ruling the school. But with graduation looming and Paloma proving an impressively quick study, Selah’s fears turn sinister as she grapples with losing the control by which she defines herself. 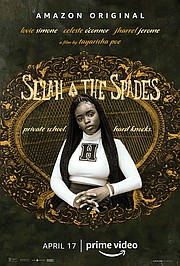 Selah and the Spades debuted on Amazon Prime on April 17, 2020

This is the enticing and intriguing storyline of the film “Selah and the Spades.” On April 17,, 2020, Amazon Prime video began showing the film exclusively.

The film’s Celeste O’Connor is a native of Maryland.

“Selah and the Spades helped me professionally and personally,” said the 21-year-old O’Connor. “Paloma is a new girl, in a new social situation. She keeps her head down and is not looking for anything. Then she gets swept up into a world of factions because Selah choses her. It was really fun and interesting to play Paloma. At the time of the filming, I was a freshman in college and trying to figure out where I fit in. It was cool to translate my experience to a character going through something similar. For me, this movie was very informative of my personal life and my personal growth and development. Developing Paloma helped me develop myself.”

Selah and the Spades is written and directed by Tayarisha Poe. In her feature debut, Poe who is African American, immerses viewers in a heightened depiction of teenage politics. O’Connor talked about working with Poe and the cast.

“Not only is this an incredible movie and story, but working on this film also gave me the opportunity to make long and really important friendships with Tayarisha and the cast,” said O’Connor who grew up in Baltimore County. “That continues to be very important to me. The experience of being on the set with other young artists of color was very impactful for me. I grew up with mostly whites, and going on-set with so many strong, creative black women who knew exactly what they wanted was really transformative. It really helped me.”

O’Connor’s film credits include “Irreplaceable You” and the independent film “Wetlands.”

“I actually got into acting accidentally,” said O’Connor. “Acting hasn’t been a lifelong dream, but the more I do it, the more passionate I become about it. I get to dive into a character, create their emotions, and tell their whole, cool story. Portraying Paloma really allowed me to delve deep into a character and really think about their emotions. This movie really launched me into my passion for acting. I said, ‘this is what I want to do.’”

O’Connor shared what it was like to watch herself in the film.

“It was weird,” she said. “It was such an informative time-period in my life. To see it all put together and acting throughout the movie was weird, but cool. I felt it was a beautiful story and I got to tell it.”

“This movie is very important to me. Hopefully, it will also be important to other people who see it - especially my fellow Baltimoreans. The movie shows black kids are human-beings and make the same mistakes as everyone else.”

She added, “Baltimore is so often portrayed as a city with so many problems. Hopefully, with this platform, other black actors can uplift and show just how multifaceted we truly are. We are multi-faceted, and there are many young actors and actresses doing what we can to support the cities we come from. I want to use this platform to uplift Baltimore and the people in my community.”

For more information about Selah and the Spades, visit www.amazon.com