Ravens would be good fit for Antonio Brown 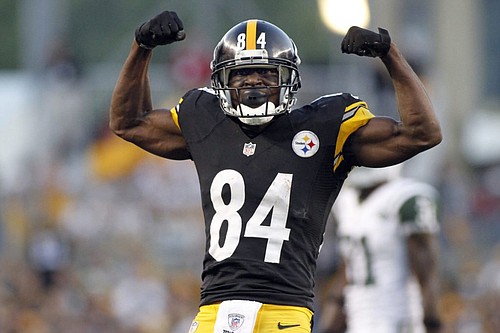 Antonio Brown (pictured above) and his cousin Marquise “Hollywood” Brown who is on the Ravens’ roster joined Ravens quarterback Lamar Jackson for work- outs during the offseason in Miami. Jackson believes that Antonio is the type of guy needed in the Ravens locker room. Justin K. Aller/Getty Images

From 2011 – 2018, the Baltimore Ravens and Pittsburgh Steelers had an intense rivalry with star wideout Antonio Brown being one of the key players. The thought of seeing Brown score touch- downs and dance in the end zone made Ravens’ fans sick.

Seeing Brown doing those same dances in the end zone wearing a Ravens jersey on is a pipe dream for quarterback Lamar Jackson. Jackson got to spend some time with Brown on the football field during the offseason and was thor- oughly impressed.

“I was like, ‘dang, there’s no quitting with him.’ That’s the type of guy we need in our locker room,” Jackson said. “It was nice throwing to Antonio Brown. I was hoping we would get him. I’m still hoping— a little bit.”

The Ravens had internal discussions about adding Brown to their roster according to multiple reports. Getting Brown to Baltimore would require a lot of work but it would offer heavy rewards.

Brown has seen his share of contro- versy throughout his career. The free agent was recently handed an eight- game suspension for multiple violations of the NFL’s persona conduct policy.

It will take a strong group of veterans and a coaching staff that can handle Brown. Head coach John Harbaugh is an experienced coach who has handled an assortment of personalities. The Ravens locker room has plenty of players in place who can handle the addition of Brown.

“I feel like the locker room here is different from any other locker room,”

Jackson said. “There’s a brotherhood going on, there’s none of that outside noise. It’s strictly inside; we worry about each other, we worry about what we have going on, we want to win.”Brown’s cousin Marquise “Hollywood” Brown is also on the roster. They joined Jackson for workouts during the offseason in Miami. An offense featuring both Browns, Mark Andrews, Mark Ingram and Lamar Jackson would be hard to stop.

Brown’s stats are proof of what he can accomplish when the situation is right. Six consecutive seasons of 100 or more receptions is a rare accomplishment. Brown was undoubtedly one of the best receivers over that stretch. As Brown said on his Instagram account, Baltimore would get a talented player motivated to make the best of his next opportunities.

“I look forward to new beginnings. I want to be the best version of myself on and off the field, and I will do my best to be a great teammate. I appreciate the NFL giving me the opportunity to con- tinue to work on myself and improve. I am thankful and grateful for this oppor- tunity to play a game that I truly love, and I look forward to joining a new team soon. Thank you to my family and all those that have supported me. I will show the fans my appreciation for this second chance by having the best season of my career.”