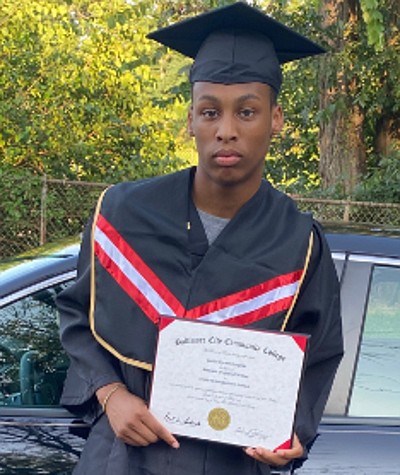 Justice Heughan graduated from P-TECH Carver Vocational High School in Baltimore last year with an associate’s degree in Computer Information Science. He said it took a real commitment, lots of hard work, and dedication to achieve the milestone. Courtesy photo

The first in his family to go to college, Justice was hired in December as a mainframe sales apprentice but delayed joining so he could take a few more col- lege courses.

In March, the coronavirus pandemic hit, but IBM kept its commitment, and Justice joined IBM this summer.

“I am surprised since the pandemic hit that IBM was able to keep its commit- ment,” Justice said. “The way businesses operate; you never know what programs have to stop or what funding might end. Now that I’m actually here and working, I’m soaking it up right now. I’m blessed.”

Justice credits the P-TECH program for his success. He said it took a real com- mitment, lots of hard work, and dedica- tion to achieve the milestone.

“I wanted to gain as much experience as I could. I had some difficult hours,” Justice said. “For my senior year, the school began at P-TECH at 7:45 and then I’d get on a bus and go to the col- lege where I had classes all day. On the weekends, I worked at the airport, so I was busy all of the time.”

The P-TECH enables students to graduate with a high school diploma and an associate’s degree in a STEM field in six years or less.

It was launched in 2011 and reportedly included 110 schools across eight U.S. states and Australia, Morocco, and Taiwan.

While all of the students received high school diplomas, 12 of them including Justice, completed a six-year program in four years and earned their associate degree in cybersecurity or computer information systems along with their high school diploma at no extra charge.

IBM counts among many tech compa- nies reportedly trying to boost diversity in the tech workforce with programs like P-TECH.

“It is nice to have someone who is invested in my future.”

When asked what advice he would pro- vide to students considering a traditional high school or P-TECH, Julius used a famous phrase. “Just do it,” he said about P-TECH. “There’s nothing wrong with [traditional] high school but P-TECH offers you so much. The biggest motiva- tor for me was my mentor.”