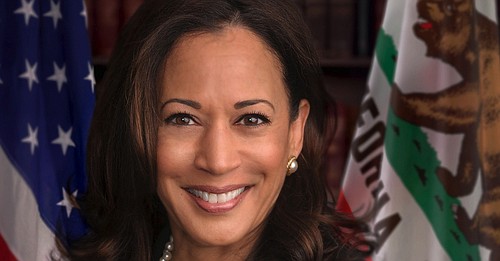 California Senator Kamala Harris is Joe Biden’s choice for vice president. When Harris was sworn in as Senator in 2017, she became the second African American woman and the first South Asian-American senator in history. Courtesy photo

Following months of speculation and debate over whether Biden should pick a Black woman as his running mate, Har- ris was named Tuesday as Biden’s choice. Biden reportedly had called Rep. Karen Bass (D-Calif.), former Ambassador Susan Rice, and three other candidates to inform them on Tuesday morning that they were not his pick.

Harris had routinely been seen as the top pick, but her clashes with Biden dur- ing the Democratic debates appeared to give Biden pause.

However, Biden had been pho- tographed in recently weeks with talking points, which noted not to hold a grudge against Harris.

Sworn in as Senator in 2017, Harris became the second African American woman and the first Suth Asian-Ameri- can senator in history.

She has said that her life as a prosecu- tor and fighting justice was inspired by her mother, an Indian American immi- grant, activist and breast cancer re- searcher.

Growing up in Oakland, Harris had “a stroller-eye view of the Civil Rights movement,” according to her official biography.

Through the example of courageous leaders like Thurgood Marshall, Con- stance Baker Motley, and Charles Hamilton Houston, Harris says she learned the kind of character it requires to stand up to the powerful and resolved to spend her life advocating for those who could not defend themselves.

After earning an undergraduate degree from Howard University and a law de- gree from the University of California, Hastings, she began her career in the Alameda County District Attorney’s Office.

In 2003, Harris became the District Attorney of the City and County of San Francisco.

Among her achievements as District Attorney, Harris started a program that gives first-time drug offenders the chance to earn a high school diploma and find employment.

Having completed two terms as the District Attorney of San Francisco, Kamala was elected as the first African American and first woman to serve as California’s Attorney General.

In this role, she “worked tirelessly to hold corporations accountable and pro- tect the state’s most vulnerable people,” according to her biography.

Since taking office, she has introduced and cosponsored legislation to raise wages for working people, reform our broken criminal justice system, make healthcare a right for all Americans, address the epidemic of substance abuse, support veterans and military families, and expand access to childcare for work- ing parents.

Earlier Tuesday, President Donald Trump suggested that, “some men are insulted” that Biden had long ago narrowed his search to women. However, Trump’s statements were seen as a last- minute bid to rattle the Democrats.

Women’s groups and the civil rights community in recent days had blasted media members and individuals on so- cial platforms for racist and sexist at- tacks against Harris and others who were considered in the vice-presidential sweepstakes.