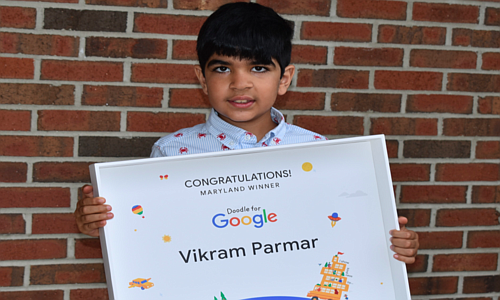 Salisbury, Md.—A talented student in Maryland could soon have their art on the Google homepage for millions to see. Google is announcing the 54 State and Territory winners in its 12th annual Doodle for Google competition, a contest open to K-12 students across the United States to design a Google Doodle inspired by the theme “I show kindness by...”

Vikram Parmar, K-3 Grade Group, from Wicomico Day School in Salisbury, Md. is one of the 54 State and Territory Winners across the country. Vikram’s doodle was selected from thousands of entries received this year.

In the next stage of the contest, Google will invite the public to vote for their favorite Doodle from the 54 State and Territory Winners, in order to help determine which students will go on to become one of the 5 National Finalists. Voting opens from August 17 to August 21, 2020 on the Doodle for Google website: doodle4google.com.

Google will announce these five National Finalists in August, one of which will go on to become the National Winner and have their Doodle featured on the Google homepage for a day.

National Finalists will each win a $5,000 college scholarship, Google hardware, and custom swag.

The National Winner will take home a $30,000 college scholarship and his or her school will receive a $50,000 tech package towards the establishment or improvement of a computer lab or technology program.