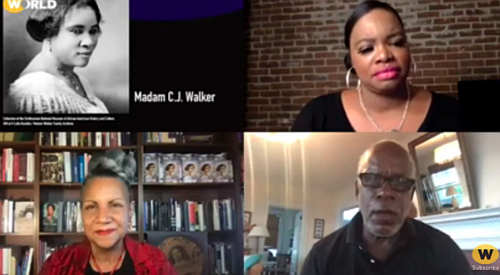 Walker has become more popular as a historical figure over the past decade; known to many as the woman who pioneered the Black hair care industry.

The film showcases the promotional slides Walker used to market her products, clips of marketing films made by the Walker company, interviews with former employees, and rare archival photos including those of her palatial estate in New York, and of Walker with luminaries such as Booker T Washington and WEB DuBois, further broadening understanding of all Walker was and did.

Nelson made “Two Dollars And A Dream” when very few were aware of Walker’s contributions to American business. His friendship with Bundles goes all the way back to the making of the film. Bundles revealed during the discussion that she helped do the audio for some of the interviews.

Much of the discussion focused on the 2020 Netflix limited series, “Self Made,” about Walker’s life, starring Octavia Spencer; with Bundles and Nelson parsing what the series got right and what it didn’t. Bundles lauded Ocatvia Spencer’s depiction enthusing, “I thought Octavia Spencer was perfectly cast as Madame Walker. Every time she came on screen, I could see the pages of my book coming alive.” Bundles also expressed her pleasure at the show’s depiction of successful early twentieth century Blacks. “I think there are a lot of people, both Black and white, who don’t know anything about that. They don’t know that there were prosperous, educated Black people back then.”

Because the public is still just learning about Walker, however, there are things, Bundles feels could have been done differently. “It’s one thing if you’re George Washington or Marilyn Monroe and there are 52 films out there about you, you can take more creative license. But with a first pass, it’s helpful if we don’t distort people too much.”

Bundles would also have preferred that Walker’s romantic relationships reflected reality more. In “Self Made,” Walker’s daughter A’lelia (played by Tiffany Haddish) had a relationship with a woman named Esther. “Esther was not a real person,” explained Bundles. “A’lelia Walker’s real life conflict was over two men, both of them doctors and both of whom she married.”

FB Ransom, played by Kevin Carroll, was also overly distorted. Ransom worked at The Walker Company from 1910 until it dissolved in the 1940s. He oversaw many developments including the Walker Building in Indianapolis, a precursor to the modern day shopping mall. Ransom, who is also Nelson’s grandfather, Bundles shared, “was a much stronger character and was really a straight arrow. As a young man he made an oath to never drink, smoke, or gamble.”

She explained she has voiced her concerns during the series’ development. “I objected very strongly to the way that they depicted Ransom. He was central to the day to day operations of the business. It was made to seem as if he, or a Black business, would do something illegal. That didn’t happen.”

To this Nelson added, “That generation coming out of enslavement, were strivers. They believed that if you walked the straight and narrow, and you strove and pushed, good things would happen. There were Blacks who might have gone to juke joints but the ones associated with the company, were very strict.”

Bundles also found the handling of the Madame C.J. Walker and Addie Munro relationship problematic. She admitted that the two businesswomen became adversaries. However, she clarified that the colorist dynamic applied to the Addie Munro character was totally fabricated. “I would not have done the Addie Munro character,” Bundles stated. “She was a stand-in for Annie Maloney, who was a successful entrepreneur and philanthropist who didn’t have a colorism issue.”

Perhaps the most exciting reveal was that Bundles is working on a new book. “There’s a lot I’ve learned in the past ten years. There’s certainly more than Stanley knew when he was making “Two Dollars and A Dream,” so we have more dimensions for the A’lelia Walker story and I’m really eager to tell that story.”