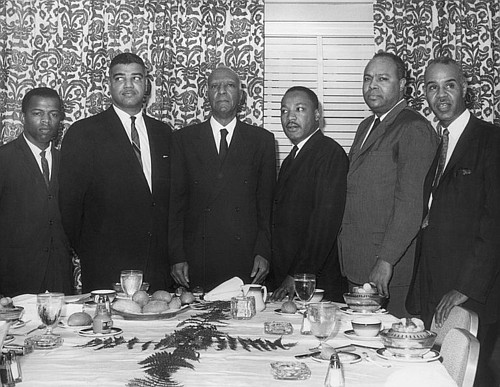 Unfortunately, the struggle to ensure that all Americans have the right and opportunity to vote not only continues today, we have actually suffered significant losses on this front over the past decade. Some of the most critical protections of the VRA, designed to remove legal barriers at state and local levels that prevented African Americans from voting, were essentially gutted by a devastating 2013 Supreme Court decision. With one stroke of the pen, the Court set us back decades and created an environment where we’ve seen numerous court challenges to voting rights and other legal measures designed to further weaken the protections of the VRA. All resulting in suppression of African American and minorities participating in the process.

Add to this this the fact that many states are imposing strict voter ID laws, cutting voting times, restricting registration, and purging voter rolls. These efforts have kept significant numbers of eligible voters from the polls in recent elections, hitting all Americans, but placing special burdens on racial minorities, poor people and young and old voters.

Adding to these now restored obstacles are new impediments — polling places consolidated in urban areas to make lines longer (and scarier given the poorly contained reach of the deadly coronavirus) and attempts to throw shade on mail-in ballots. Despite the fact that the evidence shows us that absentee voting is safe and secure.

It comes to this: Americans are being cut out of the process by other Americans. A great victory, fought for on bloody streets and across bloody bridges, a score settled and signed into law all those years ago has been compromised in the courts. Time to despair? Nope. It sounds to me like it’s time again for some good trouble.

Good trouble was what American hero and Congressman John Lewis called the struggle for this all-important right of every American. Lewis, a Democrat from Georgia, served in the House of Representatives from 1987 until his death last month, spent decades working as an organizer and activist, was a founding member of the Student Nonviolent Coordinating Committee, and original freedom rider. He helped organize the March on Washington in lockstep with Dr. Martin Luther King Jr. and A. Phillip Randolph. He walked into a beating from Alabama state troopers who cracked his head bloody and gassed him along with hundreds of marchers in the cause of voting rights on the Edmund Pettus Bridge in Selma, Alabama in 1965.

He witnessed and rejoiced in the passage of the VRA alongside his fellow freedom marchers and years later, would have to see the Supreme Court decimate the act. Lewis knew that the court’s decision would reopen the door to voter suppression, but he refused to give in to defeat.

Here is what he had to say about our struggle: “Do not get lost in a sea of despair. Be hopeful, be optimistic. Our struggle is not the struggle of a day, a week, a month, or a year, it is the struggle of a lifetime. Never, ever be afraid to make some noise and get in good trouble, necessary trouble.”

So, I say we cannot afford to let go of making good trouble. When U.S. Senator Doug Jones of Alabama said at Lewis’ memorial service, “It is the young among us in Alabama and across this nation who can heal what we have failed to heal in our lifetimes, no matter how hard John tried,” Senator Jones made note that Lewis had been heartened by today’s young activists.

“He confidently looked around and said, ‘All is well,’” said Jones. “‘It is time for the torch to be passed. It is time for me to let go.’”

That torch, brothers and sisters, is for us.

And I would say we have taken hold of it. Today you are seeing it in our protests against police brutality and racism. People standing up for their inherent civil rights. For the right to live, to move about, to vote. You see the numbers and the strength and the outrage.

Today you are seeing it in the House of Representatives, which most recently passed the John Lewis Voting Rights Advancement Act, a bill intended to restore the vote to Americans — mostly Black, Latino, and Native Americans — who were disenfranchised by the 2013 decision.

The Voting Rights Advancement Act restores the full protections of the original, bipartisan Voting Rights Act of 1965. It also creates a new coverage formula that applies to all states and addresses measures that have historically been used to discriminate against voters.

A time for action, not despair

Predictably, full passage has been stalled in the Senate, but “our struggle is not the struggle of a day, a week, a month, or a year,” right? We are fighting the long fight and making good trouble. And we need to see the numbers and the strength and the outrage at the polls.

In a few months, we will be voting in one of the most important elections of our time. You need to make your voice count. Make it count in spite of those who would stop you. Voting is necessary to make the real change we need in this country. We must unite and come together to elect leaders who are committed to reform and to working people. The only way to do that is to vote.

More than 30 states have approved ballot initiatives to allow absentee voting without an excuse. Check out your situation in your state and however you choose to vote, please make your voice heard this November.

Those who read my column know that I am a union man. I can say unequivocally as far as the UAW is concerned, we are not new to John Lewis’ fight. For decades, the UAW has fought alongside freedom marching men and women to ensure that individual rights are honored.

At a time when far too many eligible voters are wrongly turned away from the polls – or simply don’t have access to them – we must rededicate ourselves to increasing participation among eligible voters.

John Lewis said at the 1963 March on Washington in front of Dr. Martin Luther King Jr. and UAW President Walter Reuther, “I appeal to all of you to get into this great revolution that is sweeping this nation. Get in and stay in the streets of every city, every village and hamlet of this nation until true freedom comes, until the revolution of 1776 is complete.”

In that idea, Congressman Lewis is still right here standing before more bridges that need crossing. Only by voting, can we get to the other side.