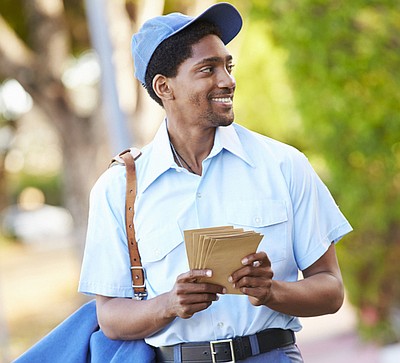 On Friday, August 21, 2020, a racially diverse group of about 30 Baltimore City residents protested outside the United States Postal Service (USPS) office in Govans to air their grievances about the USPS mess. They made their voices known. Signs read: “I Love the Post Office,” “Black Votes Matter,” “Save Our Post Office to Safeguard Mail-in Voting For Nov. 3 Election.”

Courtney Jenkins, a postal worker, served as the main speaker.

They voiced that the taking out of processors and mailboxes, instituting speed-ups, and conducting other so-called reforms remain detrimental. These things put profits ahead of workers and postal customers. Wealthy businessman Louis DeJoy who was a major contributor to President Trump’s election campaign serves as the postmaster general.

According to pundits, many of these issues at the USPS preceded President Trump. However, he has made the situation worse by instituting changes during the year of the COVID-19 pandemic, and a presidential election. Now, the perception is that Trump is using this effort to stymy mail-in ballots for the upcoming November 3 presidential election.

In the past, Democrats, as well as Republicans, manipulated to get their president into office. A case still talked about is that of former Chicago Mayor Daley, now deceased. He reportedly got Kennedy elected in a close race with Nixon. When Kennedy was elected in 1960, the Illinois ballots were among the last to be reported. These electoral votes would make Kennedy the president.

Sources said that a television commentator said that Mayor Daley was out late counting graves of deceased Chicago residents to assure a Kennedy win. Although never proven, the story still demands merit. Then, Blacks were disenfranchised by Democrats in the South and now by Republicans.

Trump’s machinations misleadingly sound the alarm of voter fraud. He says that mail-in ballots create increased voter fraud and slows down of ballot counts. DeJoy’s actions correspond with Trump’s assertions, which are pitted against postal workers.

In the old days, obtaining a job for working-class Blacks in the post office was a gem. Blacks unable to attend college found the post office and industrial jobs attractive good-paying jobs in cities where Blacks resided. The environment was freer from racism than other work venues with half-decent pay and benefits.

I remember seeing the Off-Broadway play Big Time Buck White, as a young man. One of the characters said, “He got a good job working at the post office.” Blacks in the audience laughed because it rang true. “It still is,” said Courtney Jenkins, a postal worker of twelve years.

These jobs fostered Black migration to the north and west. According to the Pew Foundation, 23 percent of the workforce at the USPS is Black.

I place my bets on workers, to tell the truth over DeJoy and Trump. Allow workers to handle logistics, equipment and routes with pay increments. Get customer input. Then, they will be essential workers.

Dr. Morgan is a scholar-activist and former educator at Coppin State University. He can be reached at kmorgan2408@comcast.net.