Ravens DeShon Elliott next man up after Earl Thomas release 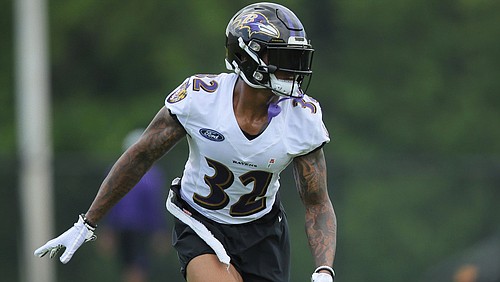 Baltimore Ravens safety DeShon Elliott will be part of the starting lineup in the upcoming NFL season. Photo Credit: Baltimoreravens.com

Thomas’ time with the Ravens came to a screeching halt after he punched fellow safety Chuck Carr during practice last Saturday. That transgression wasn’t the only contributing factor to Thomas’ release according to multiple reports.

Thomas was reportedly late for meetings and was not the most liked player in the locker room. A veteran’s committee met with head coach John Harbaugh and determined the Ravens would be better off without Thomas.

The Ravens are moving forward with their mission to win the third Super Bowl title in franchise history with the group of young safeties that are left.

The next man up in place of Thomas is third-year safety DeShon Elliott. John Harbaugh spoke about Elliott having an impact after being inserted into the starting lineup.

“I expect him to” Harbaugh said when asked about Elliott being a contributor. “He’s been practicing really well and worked hard through the offseason. It’s his time so here we go.”

Elliott was a standout at Texas and wasn’t used to being a backup to anyone. The Ravens selected Elliott in the sixth round of the 2018 NFL Draft.

Climbing the depth chart was an uphill battle for Elliott since he was behind Tony Jefferson and Weddle. Elliott had to learn patience since he has been in the NFL. Despite being a backup, Elliott prepared like he was a starter.

A fractured forearm ended Elliott’s rookie season before training camp was over. He was poised for a prominent role in Baltimore’s secondary last season but bad luck struck again when a knee injury landed him on injured reserve in October.

Elliott is gearing up for what he hopes will be his first full 16-game season of his young career.

“I think I got myself together physically, spiritually and mentally. I feel that God’s going to bless me with the things that I need to stay healthy this year,” Elliott said. “I will do the best that I can to stay healthy for my teammates and play for them. I love this team and I love this defense.”

Through the injuries and being stuck behind veterans on the depth chart, Elliott learned to be patient.The patient approach has paid off because now Elliott finds himself in line to be a starter at one of the Ravens safety spots as long as he stays healthy. He is pumped up about finally getting the opportunity to be a consistent contributor.

“I’m excited. Whether they pay me or not I would play this game. My health has been the only question I’ve had from everybody. I’ll do what I have to do to be productive for this team. Every day, I’m going to work my butt off. I’m trying to be here to win with my ‘homies,’ my brothers,” Elliott said.