Baltimore counts among most ‘giving’ cities in America 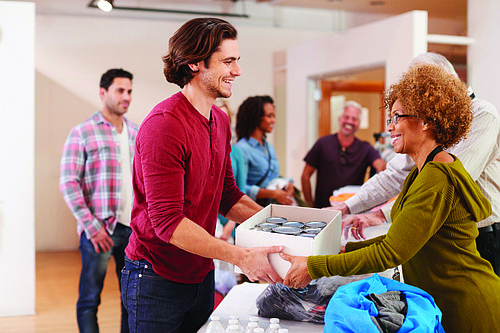 For anyone who is unable to donate money, LawnStarter experts did offer suggestions on some of the ways to show generosity toward others, including: volunteering; giving blood; offering your skills like sewing and writing; donating to your local foodbank; and checking on a elderly neighbor. ClipArt.com

With the Season of Giving in full swing, a growing consensus opines that generosity is needed more than ever, with COVID-19 destroying the economic security so many households.

Food pantries reportedly have miles- long lines of cars around the nation, with many of the hungry needing help for the first time.

The number of homeless camps are increasing as many Americans struggle to pay for housing amid layoffs and furloughs.

A new report shows that Americans— particularly Baltimore residents— are stepping up. Philanthropy News Digest reported that, “total donations made through June equaled 47.3 percent of total giving for all of 2019.”

This week, officials at LawnStarter, which has locations in Baltimore, Washington, D.C., and Alexandria, Virginia, compared the 150 biggest U.S. cities across 12 key indicators of philanthropic behavior, from volunteering rates to the prevalence of food banks. They found that Charm City finished as the 10th most generous out of the 150 big cities it compared.

The report also revealed that Baltimore enjoyed the fourth largest share of residents who improved their neighborhoods. Further, the city ranked second in the category of residents who donate $25 or more to charity.

For anyone who is unable to donate money, LawnStarter experts did offer suggestions on some of the ways to show generosity toward others.

“Time is often more valuable than money— volunteering, especially in the pandemic when many people have stopped their usual volunteering— is vital for many organizations,” said Alexandra Graddy-Reed, an assistant professor of Public Policy at the University of Southern California. “Stocking food pantry shelves, giving blood, and offering your skills like sewing or writing are great examples. Sharing about organizations and their needs through social media is also a great way to help out at no cost.”

Dr. Susan A. MacManus, a Distinguished University Professor Emerita at the University of South Florida, added that residents could focus on kindness acts.

“[Especially] to those who are lonely, forgotten and ignored— a phone call, a card, a handwritten note or drawing, sing songs or play music, offer to read, take a walk, share a good story, make a cake, bring a pet, offer to go to the grocery for them,” Dr. MacManus stated. “It’s the simple things that so many people take for granted that are missing in needy people’s lives. It is also important to feature givers of all ages and from diverse socioeconomic backgrounds. Feature recipients filled with joy and gratitude at unexpected help from both friends and strangers.”