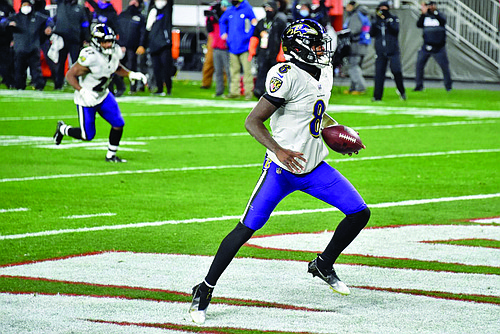 Baltimore Ravens quarterback Lamar Jackson was named the AFC Offensive Player of the Week after leading the Ravens to a 47-42 come from behind win over the Cleveland Browns. Jason Miller/Getty Images

Older basketball fans may recall when New York Knicks center Willis Reed heroically came back from a leg injury to lead his team to a championship in Game 7 of the 1970 NBA finals. Then there is Paul Pierce of the Boston Celtics who was carried off the court in Game 1 of the 2008 NBA Finals but came back later to lead his team to victory. Now Baltimore Ravens quarterback Lamar Jackson can be added to the list of heroic comebacks even though it’s on a much smaller scale. The Ravens were desperately in need of a win over the Cleveland Browns to keep their playoff hopes alive.

Jackson was named the AFC Offensive Player of the Week after leading the Ravens to a 47-42 come from behind win over Cleveland. While the Browns were driving for the go ahead score, Jackson had to go to the locker room because he was cramping. He remained in the locker room when the Ravens offense took the field. Backup quarterback Trace McSorley led the Ravens on a drive, but got hurt before a do or die fourth down the Ravens needed to convert to keep the game alive.

“I started cramping on the field. I was cramping in my forearm. And I was telling Coach, ‘I need to get some salt in my system really quick.’ My legs started cramping,” Jackson said. “I was cramping. I didn’t pull a Paul Pierce. I didn’t pull a Paul Pierce. I was cramping. As soon as I saw him go down, I started running out of the locker room. And yes, I’ve [cramped] before, but it was my fault that I was cramping that time. But this time, I don’t know what was going on— I thought I did everything right.” With 1:51 left on the clock, Jackson came in and found Marquise Brown for a 44-yard touchdown to make the score 42-35.

“We had a great play called, I dropped back, it looked like they were in man coverages. I was making a scramble to my right, and Marquise just came open. I just had to give him a playable ball, and he just did the rest,” Jackson explained. “There was no doubt. We know we have a chance whenever we get the ball with Lamar, so we just had to go out there and make a play,” Brown said. “I just saw everybody come down in a Cover Zero-type look, and I just tried to beat my man. They came up, they got aggressive at the line, but I was able to shake loose, and Lamar [Jackson]— [he is] always extending the play, and he made a great throw. God put us in a great position.”

Jackson finished the day with 163 passing yards and a touchdown. He rushed for 124 yards and two touchdowns. It was the kind of dual- threat performance that Jackson has become known for and was reminiscent of the playmaking ability that earned him the MVP last season.

The Ravens are still in the playoff hunt after beating the Browns. They’re 8-5 record is tied with the Miami Dolphins for the final wildcard spot. But Baltimore’s five playoff losses have all come against AFC teams. Their remaining schedule features the Jacksonville Jaguars, New York Giants and Cincinnati Bengals, which should give them a chance to strengthen their odds of making the playoffs. They’ll need help from the reigning NFL MVP and Week 14 Offensive Player of the Week.