Instead of prosecuting Trump, give him the OJ treatment 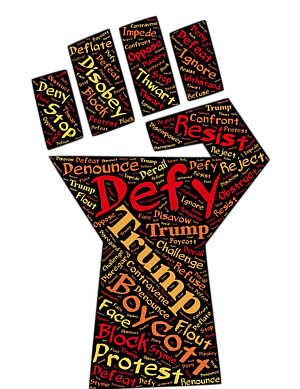 Instead of prosecuting Trump, give him the OJ treatment Courtesy Photo

Since well before Joe Biden’s victory in the 2020 presidential election, there has been talk of how outgoing president Donald Trump might be criminally prosecuted at the state or federal level for any of dozens of alleged crimes once he leaves office.

Prosecutors in New York seem intent on bringing The Donald down one way or an- other, but at the federal level Trump-haters can probably expect little joy. Presidents don’t like the idea of prosecuting their predecessors, lest they themselves start, and get caught on, a never-ending “he’s out, let’s get him!” merry-go-round.

But there’s another way. Remember OJ Simpson? The former football star was acquitted of the 1994 mur- ders of his former wife and her friend Ron Goldman. Goldman’s family filed a wrongful death suit; won a civil judgment for $33.5 million; and have spent the last quarter century confiscating Simpson’s assets and income to satisfy that judgment.

The Goldmans won their case on a “preponderance of evidence” standard rather than “proof beyond a reasonable doubt.” In Trump’s case, there is no reasonable doubt: He’s on the hook for billions.

Article I, Section 9 of the US Constitution mandates that “No Money shall be drawn from the Treasury but in Consequence of Appropriations made by Law.”

In February 2019, Trump illegally and unconstitutionally attempted to misappropri- ate $6.6 billion for construction of his “border wall.” About a third of the money turned out to have already been spent for its lawful purpose, but he got away with at least $4 billion in stolen funds.

Since then, the matter has circulated in the courts, with lower federal courts taking due notice of the theft, but the US Supreme Court dismissing the suits for standing (according to SCOTUS, Congress has no recourse when presidents seize its lawful powers for themselves).

But the case is open-and-shut. He did it right there in the open, without even trying to hide it. There’s no doubt whatsoever that it was unconstitutional. And since it was not a legitimate presidential power there can’t be any “sovereign immunity” claim. The absence of such a claim also dispels any future argument from Trump’s defend- ers that the case is moot once he’s left office. Donald Trump owes the US Department of the Treasury $4 billion. It should sue, get a civil judgment in its favor, and move swiftly to collect. Trump almost certainly doesn’t have $4 billion in cash lying around, and his actual net worth may be negative. After confiscating and auctioning his assets— hotels, apartment buildings, golf courses, pretty much everything except a single residence, a family vehicle, and personal effects such as clothing— Treasury may have to split the proceeds with his other creditors.

But he also has known and prospective future income, including but not limited to his presidential pension, speaking fees, book advances and royalties, etc.

The US poverty level for a family of three (Donald, Melania, and Barron) is $21,300 per year so let him keep that much at least. After all, we’re not monsters. The rest goes toward repaying the money he stole.