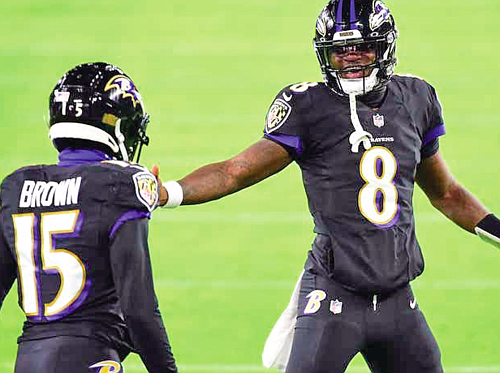 Since Lamar Jackson has been the starting quarterback for the Baltimore Ravens, the team has made it to the playoffs. (Above) Wide receiver Marquise “Hollywood’ Brown (left) and quarterback Lamar Jackson (right) during the game against the Dallas Cowboys at M&T Bank Stadium in Baltimore on December 8, 2020. Evan Habeeb/USA TODAY Sports

The Baltimore Ravens have made it to the postseason in each of the years that Lamar Jackson has been the starting quarterback. That came after the team missed the playoffs for three consecutive seasons from 2015-2017.

There have been more than enough obstacles in Baltimore’s path to the playoffs this year. The roster was decimated by injuries to key players. A Covid-19 breakout resulted in over 20 players, including the starting quarterback not being able to play in at least one game. However, the Ravens still have a chance to make the playoffs.

At 9-5, they currently sit just outside of the postseason bracket with the No. 8 seed. The Miami Dolphins are the No. 7 seed and hold the same record. The No. 4 - No. 6 seeds are occupied by the Tennessee Titans; Cleveland Browns; and Indianapolis Colts. All of which have a 10-4 record.

With two games left, the race is extremely close. The Ravens have a 77 percent chance to make it to the postseason according to multiple playoff odds trackers. They’ll need to win their final two games and have either the Las Vegas Raiders or Buffalo Bills beat the Dolphins.

“Of course, we want to get into the playoffs. So, we know that we need some help, but the focus, really, for us, is going to be on taking care of our business,” said head coach John Harbaugh. “It doesn’t matter what anybody else does if we don’t take care of our job, and our job is to win. So, we’ve got to find a way to win this week— that’s 100 percent exactly what we’ll be locked in on and focused on. Everything else is not something that we can control, but we can control how we play. We need to play our best football next week to win that game.”

Baltimore will host the New York Giants on Sunday, then travel to Cincinnati to play the Bengals in the final game of the season. Like anyone else in their position, the Ravens players are aware of what’s at stake over the next couple of weeks. They’re mindset is to not look too look to far into the future.

“We’ve just got to keep focused on what we have in front of us. We’ve got the Giants in front of us, now,” Jackson said. “We’ve got to focus on those guys, get on the film, and watch those guys and pray next week, the ones we need to lose, lose, because we’ve still got to try to get to the playoffs— that’s our goal, but one game at a time. We can’t peak too soon.”