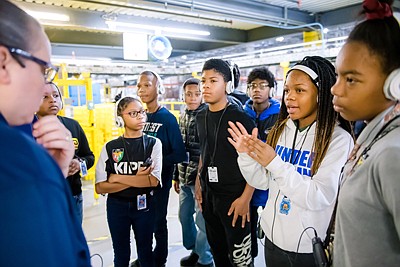 A special group of Baltimore students had the privilege of missing a portion of their school day for another intriguing learning experience.

On January 24, 2020, Amazon hosted KIPP Ujima Village Academy’s first-ever middle school robotics team for a ‘Future Engineer Robotics Camp,’ including a tour of the Baltimore robotics fulfillment center facility, which was followed by a thought-provoking robotics activity and the opportunity to meet with Amazon leadership.

KIPP Ujima Village Academy, a public charter middle school in the Walbrook Junction section of the Baltimore, just formed its robotics program as a result of a $10,000 computer science grant from Amazon in April 2019. High Point High School (Beltsville) was the other public school in Maryland that was a recipient of the grant last year.

The behind-the-scenes tour consisted of Ujima students and staff seeing the life cycle of Amazon products and seeing live robots in action in the Amazon Baltimore fulfillment center. Hailey Davis, the assistant general manager of the robotics fulfillment center, led the tour.

engage our future STEM associates in these programs so these can be our innovators for the future,” Davis said. “In the long run we want to make sure that children in our community have the opportunity to experience something like [this]. This is a new program that Amazon is very dedicated to, to create our future leaders.”

Amazon volunteers from the nearby Baltimore fulfillment center engage with students during an Amazon Future Engineer day camp earlier today.

Following the tour, students broke off in groups to assemble robots with Legos by following outlined instructions. After the robot was built, students collaborated to program the robots to make certain movements through a computer coding system. Once students completed the robotics activity, they placed their finished products on the ground and beheld how the robots operated.

Teamwork, communication and overcoming failure were some of the takeaways from the robot building activity, according to Ben Davis, a sixth grade science teacher at Ujima Village Academy who came along to mentor the students as they built robots.

“You think about the future of the economy and the world— majority of the things are going to be computer-based, involving software design, or computer design or coding,” Davis said. “Getting kids experience with this in middle school years allows them to get the opportunity to be experienced with this stuff, and feel confident they can pursue something like this in the future.”

Amazon robots have come a long way – students from KIPP Ujima Village Academy learn about the evolution of robots over time on a tour of the Baltimore fulfillment center.

Davis also serves as the lead robotics instructor in Ujima Academy’s robotics program, which is comprised of 10 students so far. The program, still in its early stages, meets every Tuesday after school for various computer science-related activities.

Ujima and High Point are the first grant recipients in Maryland as part of Amazon’s “Future Engineer” nationwide grant program that recently launched. According to the company, the Future Engineers Program provides more than 150 underserved schools with access to robotics and computer science programs.

Cameron Collins, an eighth grader at Ujima Village Academy, is enrolled in the robotics program and was one of the estimated 20 participants in the robotics camp event at the fulfillment center.

She says she feels that robots will soon be a main part of the modern world so learning more about it is what drew her to the robotics program at school. Assembling the robots was somewhat of a difficult team-building exercise, Collins said, but was nonetheless a worthwhile learning experience.

“While it can be confusing and frustrating, it’s a good learning experience,” said Collins, who plans to go on to Baltimore Polytechnic Institute after graduating from Ujima. “I feel like you can learn a lot working with other people, and it’s nice knowing how to cooperate and get things done as a group.”

Jasmine Bacot, manager of external relations with KIPP Baltimore, was partially responsible for applying for the $10,000 grant. She says that she and her colleagues pursued the grant funds as a way to create various opportunities for students in accordance with KIPP’s STEM programming and initiatives.

“I see future scientists, future engineers, future computer scientists, software developers— they’re all a very bright group of students, and it’s just a joy being able to watch them learn, and grow, and work together on these different initiatives and to be excited about STEM,” Bacot said.

Ujima staff members, along with leaders at Amazon, foresee the partnership and robotics camp with the Amazon Baltimore fulfillment center being an ongoing function for years to come.

To conclude the robotics camp, Ujima students and staff engaged in a question and answer session with Amazon leadership and received Amazon toy vans and planes as souvenirs before boarding the bus back to campus.