A ‘Wicked’ Production Comes To The Hippodrome 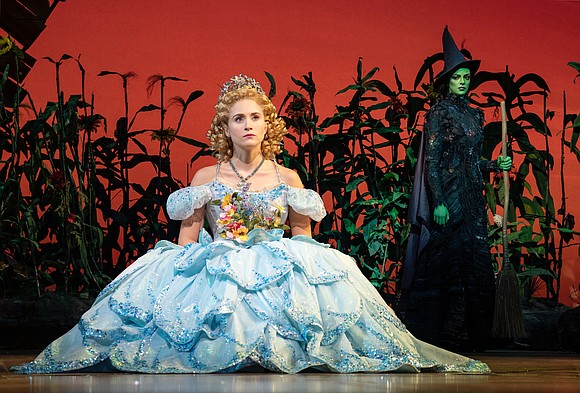 WICKED opened at The Hippodrome February 12, and will run through March 8. Courtesy Photo

Props were being unloaded from a large tractor-trailer, the sound system was being tested, and stage crew and others busily moved about the stage. It was Tuesday, February 11, 2020 and load-in day at The Hippodrome for the Broadway blockbuster Wicked. The show opened at The Hippodrome February 12, 2020, and will run through March 8, 2020.

Having recently celebrated its 16th anniversary on Broadway, Wicked is the winner of over 100 international awards including the Grammy Award and three Tony Awards. Wicked has been performed in over 100 cities in 16 countries around the world.

“I have been with Wicked for 14 years,” said Company Manager Steve Quinn as he watched the bevy of activity on load-in day. “I am pretty blessed to be honest. It’s nice to be with a show that is so popular, maintained, and well loved. The show has been on tour for 15 years now, so there are some pretty great things going on. We’re going to be here in Baltimore for nearly a month, and this is the fourth time we have brought Wicked here.

“When audiences walk into The Hippodrome, they are going to see the big dragon and The Oz map and know they are going to go someplace different for two-and-a-half hours. The production is set in a timeless world, and is an incredible story about friendship and how we should not see things as they are.”

Wicked looks at what happened in the Land of Oz…but from a different angle. Long before Dorothy arrives, there is another young woman, born with emerald-green skin, who is smart, fiery, misunderstood and possessing an extraordinary talent. When she meets a bubbly blonde who is exceptionally popular, their initial rivalry turns into the unlikeliest of friendships— until the world decides to call one “good,” and the other one “wicked.”

“People reflect a lot on our story once the final curtain comes down,” said Quinn. “The main thing is that you come in with a certain knowledge of the wicked witch and the good witch. But people will look at them differently after our show. You have a woman who is basically green, and is different.

“We have all been the green girl at some point of our lives. It must not have been

easy growing up green, but she illustrates what it’s like to be an outsider and still succeed.”

Based on the novel by Gregory Maguire, Wicked has music and lyrics by Stephen Schwartz, and a book by Winnie Holzman. The production, is directed by Tony Award winner Joe Mantello with musical staging by Tony Award winner Wayne Cilento. Wicked is produced by Marc Platt, Universal Stage Productions, The Araca Group, Jon B. Platt and David Stone.

Wicked has amassed nearly $5 billion in global sales and has been seen by over 60 million people worldwide.

“The people that I work with are amazing,” said Quinn. “I am incredibly proud of what’s on the stage. In 14 years, I have never felt the quality of the show has gone downhill. We constantly put new and exciting talent in this show. Many have gone on to Broadway. The show also features established Broadway veterans like Clevant Derricks who won a Tony Award for Dreamgirls back in 1983.

“People typically love to come to see a show on the weekend, but they can also feel free to come see us on a weekday. We aren’t sold out yet, and great seats are still available.”

To see a short video of the Wicked load-in at The Hippodrome, visit our website: www.baltimoretimes-online.com.