Ravens DB Chuck Clark Is Happy To Remain In Baltimore 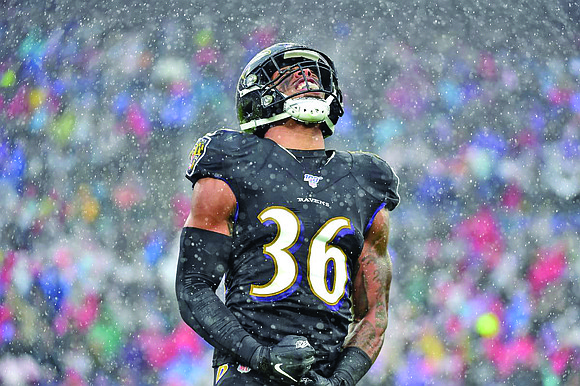 The Baltimore Ravens and safety Chuck Clark agreed to a three-year, $16 million contract extension earlier this week. He likes how things are shaping up for him and his team in the near future. Evan Habeeb/USA TODAY Sports

The Baltimore Ravens and safety Chuck Clark agreed to a three-year, $16 million contract extension earlier this week. The deal came after a season in which Clark stepped into a starting role. Clark wore the green dot helmet designating him as the player responsible for relaying plays from the coaches to the guys on the field. It's been a whirlwind of a year for the 2017 sixth-round pick out of Virginia Tech where he started 42 out of 50 games.

"Stepping into a starting position, having a daughter, going it the playoffs, being in a position to sign a contact extension— I sit back and look at those things. It's been a crazy shoot, last year at this time I was like I'll be on the second string but in my mind I knew I'd always be ready," Clark said via the Ravens podcast.

Clark says he and the Ravens management had something in the works towards the end of the season but both parties wanted to focus on the playoffs. Once that was over, we got back into negotiations for an extension.

Clark took the long road to a starting spot on the Ravens defense. He was a heavy special teams contributor while getting sporadic reps on defense. Clark started his first two games in 2018 and recorded his first interception, which came against the Kansas City Chiefs during his second season in the league.

"Not everything is going to be smooth sailing as opposed to somebody that comes in from the early rounds and is almost guaranteed an opportunity to play or to be starting," Clark said.

A week five injury to veteran safety Tony Jefferson opened the door for a bigger role on Baltimore's defense. Clark played in all 16, starting 12 while posting 16 tackles, nine pass deflections, along with a sack and an interception.

Clark mentioned players like former Ravens safety Eric Weddle and Jefferson as veterans who helped him along the way. Now with a new deal in hand, Clark will compete with Jefferson for playing time along side Earl Thomas.

The Ravens will be contenders in the coming years thanks to MVP Lamar Jackson at quarterback and one of the best secondaries in the NFL. Clark likes how things are shaping up for him and his team in the near future.

"I felt like this is the right place for me and my family," Clark said. "As a ball player you want to win championships. I feel like we have the right pieces in place to do that."