What Placing Franchise Tag On Matt Judon Means For The Ravens 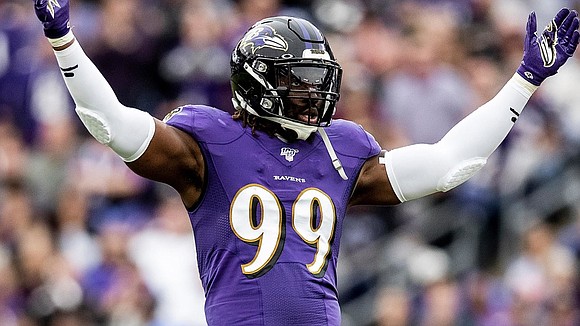 Matt Judon has just come off a 9.5 sack season in which he also notched 33 quarterback hits. At 27-years-old, he is a budding star voted to the Pro Bowl for the first time in his career this past season. Courtesy Photo/Baltimoreravens.com

The Baltimore Ravens have consistently been able to find impact pass rushers outside the first and second rounds of the NFL Draft over the years. Players like versatile edge rushers Pernell McPhee (5th round 2011) and Za'Darius Smith (4th round 2015) are examples of prospects that Baltimore plucked late in the draft and developed into disruptive pass rushers. Both McPhee and Smith signed lucrative contracts with other teams once they were eligible to be free agents.

The Ravens' latest prospect turned Pro Bowl caliber defensive player, Matt Judon could become a free agent next month. Baltimore would be wise to place the franchise tag on the 2016 fifth-round pick that became one of their leaders last season. Tagging Judon would hold a $16.3 million salary in 2020 but more importantly, it would give the Ravens exclusive negotiation rights and give both parties more time to agree to a deal.

Baltimore could also designate Judon as a non-exclusive free agent. That would give other teams an opportunity to negotiate a deal with Judon but the Ravens would have an option to match the deal. If they decide not to do so, the team that signs him would have to forfeit two first-round draft picks.

Judon is coming off of a 9.5 sack season in which he also notched 33 quarterback hits. At 27-years-old, Judon is a budding star voted to the Pro Bowl for the first time in his career last season.

His 6-foot-3, 275-pound frame and athletic ability make him a piece that defensive coordinator, Don 'Wink' Martindale can utilize in multiple ways. Judon has played left and right outside linebacker in addition to middle linebacker and interior defensive lineman. That versatility is invaluable.

The Ravens currently have only $31 million in cap space to work with. Placing the tag on Judon would take up over half of that number. If Baltimore can sign Judon to a deal similar to the four-year, $52 million contract the Green Bay Packers signed former Washington Redskins edge rusher Preston Smith to, they can reduce his cap hit to $13 million. They'd probably have to increase the guaranteed money to make the deal for Judon.

Baltimore is coming off a season with a 14-2 record— the best in franchise history. Their dynamic offense is led by 2019 MVP Lamar Jackson.

Despite the Ravens success lighting up the scoreboard, offensive coordinator Greg Roman didn't receive any head coach offers and will be back for another season. The window is open for them so, they must maximize their opportunity.