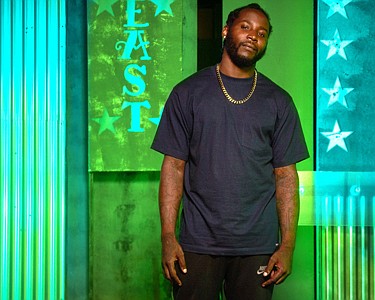 Emac, a traveling tattoo artist who began his career by practicing on himself, will represent the East on the show, which airs at 10 p.m. on Tuesday, January 7.

The season, which is titled “Ink Master: Turf War,” features contestants from four different regions of the country – East, West, South, and Midwest – representing their “turf” for a chance to win $100,000, an editorial feature in “Inked,” and the coveted “Ink Master” title.

“I’m excited because people will see something out of Baltimore that is positive and put the city in a more positive light,” Emac stated.

“I know the competition will be fierce, but everything is a learning process,” he said.

He said a friend had promised to give him his first tattoo but never delivered.

“When I started working on myself, I realized that this is paying for more than just this stuff, it started paying my rent. It started paying for my car. And I was like, ‘You know what? This also can pay for studio time.’ It’s a win-win situation,” Emac stated.

From butterflies to roses and calligraphy, Emac has earned a reputation as the go-to tattoo artist in Baltimore and many other places.

With the Ink Master television competition, his profile is sure to be raised all the more.

Each of the artists on the show will be tested on their technical skills along with their on-the-spot creativity, as they must conceive and execute original tattoos on “human canvases.”

Officials noted that each episode of Ink Master will focus on a different and distinct style of tattooing and, as always, while the artists’ masterpieces will last a lifetime, so will their mistakes.

Emac and the other contestants will face a sturdy panel made up of Dave Navarro (musician, filmmaker, and artist) and renowned tattoo artists Chris Nunez and Oliver Peck.

“This is definitely going to be a learning experience for the next day,” said Emac, whose first love is music. “But this is crazy.”

Emac said he doesn’t favor one work of his art over another. He’s proud of them all.

“Every piece of work I do is exciting to me,” Emac stated. “I try to make whatever I’m doing better than the last thing I did.”

For more information about the show, visit: https://www.paramountnetwork.com/shows/ink-master