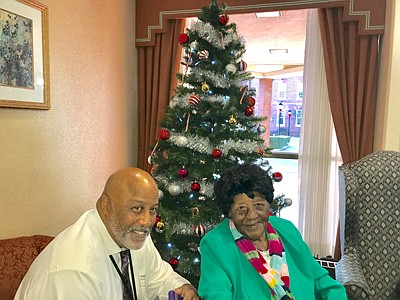 Meet Bessie Elizabeth Harding. She likes to eat pork chops, cheesecake, crab cakes, and chocolate. She enjoys singing along during Gospel Karaoke and plays Bingo regularly. She’s spry, has a sense of humor that will tickle any funny bone, encourages others, and has an amazing memory. Not bad, considering Harding recently celebrated her 110th birthday in November.

“I feel as good as anyone can feel,” said Harding. “If I see someone needs something, I give it to them. My mother used to tell me I would give someone the shirt off my back. I would if I saw someone suffering. I was always kind to people. I also love God. That’s why I have lived so long.”

She added, “I used to be bad. But I changed. I was touched by the Holy Spirit. Lord have mercy, He touched me.” 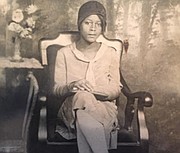 The week of her birthday, Harding received a proclamation and visit from Baltimore Mayor Bernard C. “Jack” Young. According to her family, Ms. Harding was born in Nathalie, Virginia on Thanksgiving Day in 1909. She moved to Baltimore in the mid-1930s and lived in various neighborhoods including Waverly, Poplar Grove and West Baltimore. She currently resides in Keswick Multi-Care Center in Roland Park.

“I saw Martin Luther King, Jr. on television,” she recalled. “He was a wonderful man. It was exciting. It was great to see people of color really doing something. Everywhere Dr. King spoke, the places were crowded. After he got shot, there was rioting. At the time of the riots in Baltimore, I was living on Shirley Avenue.”

“I can truly say I have enjoyed myself,” she said. “I have been to many places including California. I loved getting around and seeing places and things I had never seen. My sister used to fuss and tell me I would spend up all my money traveling.”

She added, with a laugh, “I would tell her she couldn’t tell me how to spend my money.”

Harding was the youngest of five siblings, who have all passed.

“I was the baby girl,” said Harding. “I had three sisters and two brothers.”

She recalled waiting tables at the Mount Vernon Club on Mt. Vernon Place in then-segregated Baltimore. She worked there for more than 30 years.

Ms. Harding and her husband, the late Carlton Harding of Baltimore never had children. But the couple helped to raise two nieces and one nephew.

Aaron Von Moore is her great-nephew.

“Aunt Bessie was over 100 years old and still going to Lexington Market,” recalled Moore. “She was still going to the bank too. She’s a very independent lady.” 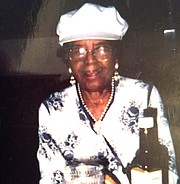 Bessie Elizabeth Harding during an event some years ago.

According to Moore, Harding joined Enon Baptist Church located at 601 N Schroeder St. over 50 years ago.

Crystal Corbin works at Keswick, and is Harding’s social worker.

“Ms. Harding is such a blessing,” said Corbin. “She is still very alert, and able to express her needs and wants. She is also very vocal. She encourages other residents on the unit to eat. She amazes me. She is the oldest resident we have ever had here at Keswick. She even takes herself to Bingo.”