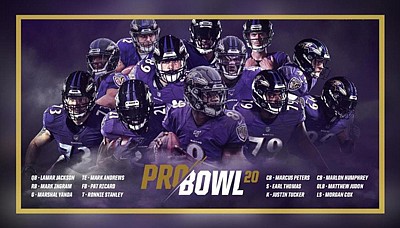 Twelve players from the Baltimore Ravens were selected to play in the 2020 Pro Bowl and John Harbaugh and the Ravens staff are the team coaches. Courtesy Photo/BaltimoreRavens.com.

The 2019 season ended on a sour note for the Baltimore Ravens. Their championship aspirations were erased in the divisional round of the playoffs. However, there is still one more game to play for 12 Ravens.

Baltimore had 13 players selected to play in the Pro Bowl. Cornerback Marcus Peters was one of them but he won’t make the trip to Orlando for the game because of an injury.

John Harbaugh and the Ravens staff coached the team. A trip to Orlando isn't a bad consolation prize for Harbaugh.

"It'll be fun. It's a chance for us to kind of heal up a little bit in a great environment," Harbaugh said. "You get to see the other players in the league. That's kind of a neat thing about it."

Jackson was mum on attending the Pro Bowl when he was asked about it after the playoff loss to the Tennessee Titans. That's understandable. The only Bowl Jackson wanted to attend was the Super Bowl. That was the goal he would always bring up when asked about his major accomplishments during the season.

second season. Everyone wants to see his dynamic playmaking ability. That's why he was one of the top vote getters for the Pro Bowl. Even future Hall of Famer Drew Brees' son wants to see Jackson more than any other player.

"Lamar, my son Baylen is looking for you at the Pro Bowl this week. You are his guy! He's pumped to meet you," Brees said on his Twitter account.

No other team has more players on the Pro Bowl. It's a testament to the talented roster that former GM Ozzie Newsome and current GM Eric DeCosta have put together.

Judon, one of the Pro Bowl players is set to hit free agency.

The Ravens staff will have decisions to make regarding Judon and some other key players who will become free agents when the league year ends.