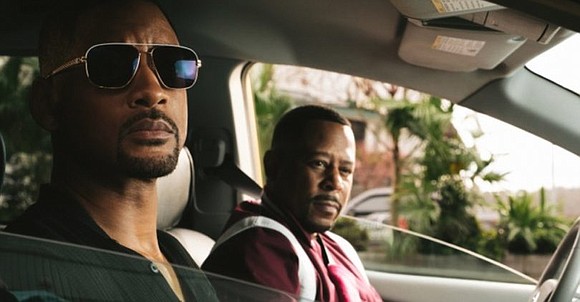 Will Smith and Martin Lawrence in Bad Boys for Life. Courtesy Photo

Though the script is solid in most aspects, its dialogue, its rapid-fire banter is its strongest asset. When Smith and Lawrence exchange verbal jabs nothing is off the table. Viagra, becoming a grandparent, the last time either one had sex… The two are extremely competitive and well aware that father time could beat them in a foot race.

Equally strong is the chemistry between the two leads. Twenty-five years later, their bromance is as fresh as the day they met. Smith, as the mercurial, perpetual bachelor exhibits his best swagger in years. His Mike is like an old club goer who hasn’t realized the crowd around him is young enough to be his children. Lawrence’s curmudgeon and sensitive character plays perfectly against Smith’s brash attitude. He’s hysterical in ways only true comedians can be. The characters’ bond is easy to like and has been cherished by filmgoers who will likely follow them into old age even as these bad boys start to solve crimes in nursing homes.

Every member of the cast shines brightly: Joe Pantoliano as the very manic Captain Howard; Kate del Castillo is so evil she would make a witch blush. As Aretas, she sneers: “A bullet is mercy for that son of a bitch.” Paola Nunez makes Rita brave and sensual. A very fluid cameo performance by DJ Khaled, as a smarmy crook, should win him more roles. Jacob Scipio as the evil, coldblooded assassin puts his stamp on this movie. Theresa Randle, Nicky Jam, Massi Furlan, José Alfredo Fernandez and John West Jr. fill out the ensemble.

So, what’s the flaw? The finale looks too artificial: The camera focuses on an empty building, the lens targets two rats. The rodents are so clean and white they look like they came from central casting with personal hairdressers and makeup artists. The building is entirely too majestic (production designer Jon Billington, set decoration Lori Mazuer and Daniela Rojas), like an opera set not an abandoned facility. The sequence seems phony—almost corny.

This final battle is saved by the quick edits (Dan Lebental and Petr McNulty), which have given the entire 2H 3M film a very modern, tight and forceful rhythm. The musical score by Lorne Balfe, with brazen horns during action scenes and soft violins during drama, also helps to counteract this imperfection.

Bad Boys for Life is all it needs to be. And then some! Get ready for it. “What you gonna do when it comes for you?”