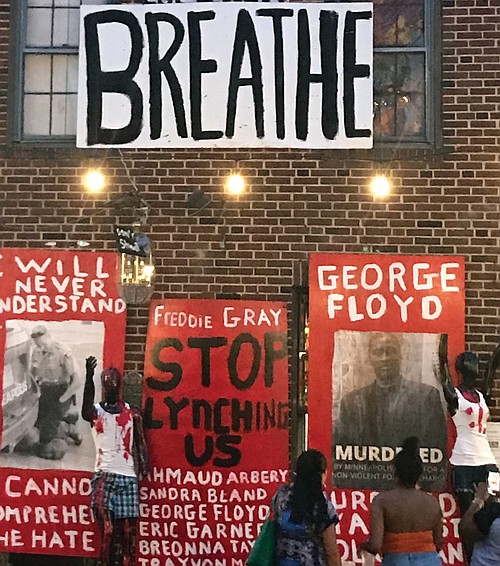 Photos of George Floyd displayed on the side of a building at Fells point in Baltimore City. Photo Credit: Fatiha Belfakir

The Islamic Community in Maryland (ICM) is coming up with series of educational programs and seminars to both promote justice and solidarity with the African American community and to condemn the death of George Floyd, a 46-year-old black man who was killed while in police custody in Minneapolis.

Imam Chad Earl, ICM Director of Religious and Youth Affairs, told the Baltimore Times that George Floyd wasn’t killed in a vacuum, and it is the duty of the Muslim community to understand whether or not it is making any sort of difference or just benefiting from status quo. As he Black community leads this movement, Earl stated that the Muslim community must be willing to listen and learn how it can best help out as allies for justice.

“Calling for justice is at the core of our faith, whether we as Muslims understand it or not. We are taught, “Help your brother whether he is oppressed or the oppressor.” When asked how one helps an oppressor, the Prophet Muhammad (Peace and Blessings be upon him) said, “Stop him from oppressing.” Justice is a goal of Islam,” said Earl. “Even if at some level we understand that only true and complete Justice will happen in the Afterlife, we must work together, amongst ourselves, and with other likeminded people to stand up for those who need our help to the best of our abilities.”

In the aftermath of the most recent assault on black lives, the United States of America finds itself confronted with a devastating global pandemic and by persistent legacy of racism. Police violence against African Americans has once again become the subject of national debate as millions of devastated Americans gathered throughout the States to denounce police brutality and racial bias after the death of George Floyd. Many people have been outraged by the unjust deaths of Freddie Gray, Ahmaud Arbery, Breonna Taylor, Tony McDade, and countless others who had their potential stolen.

According to Mapping Police Violence, one of the few organizations that track information on police violence and use of force, more than 1,000 unarmed people died as a result of police harm between 2013 and 2019. About the third of them were black.

ICM is working on a series of educational programs for the community in the coming weeks and months such as workshops, lectures, khutbas, which will be held in an effort to better connect with and support local Masaajid which are predominantly African Americans.

Earl stated that the ICM is also studying its own demographics inside and will be looking at the causes and cures for any lack of participation from minority segments of the community, both African-American and others, so that it can build and maintain a community which lives up to the Prophetic model of uplifted and honoring humanity and its diversity.

“Given the fact that we’re physically unable to gather in our houses of worship and elsewhere, we aren’t able to measure the community’s reaction as well as we normally would. Yet, our community is very diverse, and that